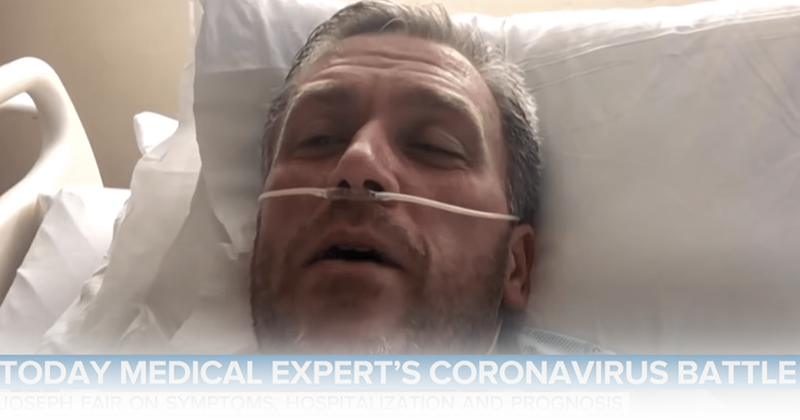 Dr Joseph Fair, a virologist and NBC News contributor, who claimed he suffered from “undiagnosed” COVID-19, has revealed he never had it to begin with.

Fair was struck down supposedly with COVID-19 in May, and was severely ill for two weeks, with four days spent in critical condition. He decided to share his COVID-19 story with the world via an NBC interview from his hospital bed. Fair claimed he caught it through the eyes during a flight, despite wearing a mask.

“I’m somewhat in the peak of health in my life, I’m a very healthy person,” Fair wrote. “If it can take me down, it can take anybody down.”

However, in the interview, Fair revealed that he was tested four times for COVID-19, but all the results came back negative. He argued that the tests were giving 50% false negatives, and that given he waited some time before being tested, there may be no detectable virus in his bloodstream.

Ghislaine Maxwell, the socialite who was more of a social disease to the powerful pedophiles she introduced to Jeffrey Epstein’s surveillance blackmail shakedown. Maxwell awaits an arraignment and bail hearing in a Brooklyn New York metropolitan detention center that has been described as a third world hell hole.

In a Twitter thread on Tuesday, Fair said that a recent antibody test for COVID-19 was negative, meaning he had never, in fact, been struck down with the virus.

“I had myriad COVID symptoms, was hospitalized in a COVID war & treated for COVID-related co-morbidities, despite testing negative by nasal swab,” he wrote.

Fair said his “path forward” would be a second antibody test, along with a follow up from a tropical medicine specialist and a pulmonologist “in an effort to diagnose what made me so ill.”

He was not the first media commentator to supposedly come down with a bad case of COVID-19. Chris Cuomo, brother of New York Governor Andrew Cuomo, spent some weeks in quarantine at his house, eventually emerging in a theatrical fashion for the cameras, emphasising the need to keep to the regulations.

Cuomo had, in fact, emerged days before, and encountered a cyclist who criticised him for going out with a positive virus test. “I don’t want some jackass, loser, fat tire biker being able to pull over and get in my space and talk bulls**t to me, I don’t want to hear it,” Cuomo said.