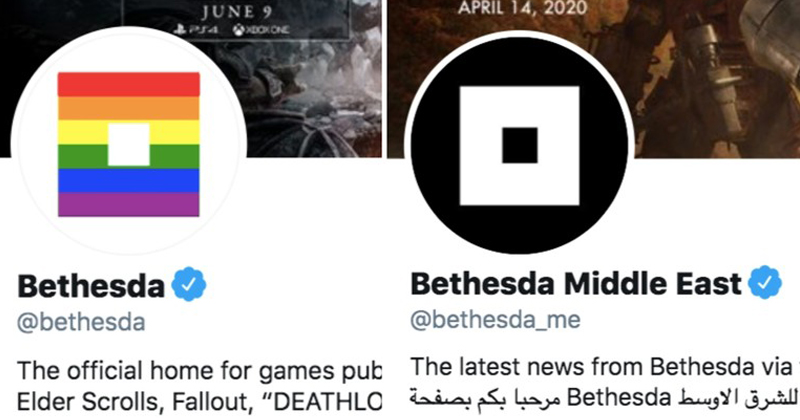 The Bethesda video game company has drawn the ire of netizens who noticed that it had changed its Twitter profile logos to a rainbow flag to celebrate LGBT Pride Month, but made an exception for its Middle East account.

The American firm has been flooded with comments accusing it of insincerity and meaningless virtue signaling in its quest to appear woke.

Many angry gamers suggested that the only thing Bethesda cared about was money — and that if LGBT rights were truly high on its agenda, the Middle East account would also display the pride flag.

it's 100% real.
Been laughing for a good 3minutes straight. pic.twitter.com/VIFxsE8som


Some noticed that while the company logo had been switched on its main account and accounts in France, the UK, Brazil, Poland and New Zealand (among others), it was also absent on the gaming giant’s Russian Twitter account. That’s perhaps because Russia has a law against the “propaganda of non-traditional sexual relationships.”

One user insisted the move was more about “marketability” to certain audiences, rather than standing on “principle” across the board. Influential corporations “didn’t care about gay rights when it was risky for them to say so” and now “continue to not care” in countries where it might hurt their business, they wrote.

“When the virtue-signaling gets in the way of making dinars, it goes to the curb,” another said.

“We’re excited to celebrate pride month in territories where it won’t negatively impact our income,” another sarcastically added.

Bethesda was also accused by one person of being a “fake woke corporation” while another Twitter user asked: “Isn’t the whole point of pride to push for actual gay rights where gays actually need them?”

Some noticed that along with its pride flag displays, Bethesda also posted a plain black square in honor of the Black Lives Matter movement on Tuesday after the #BlackoutTuesday hashtag took off.


Alex Jones brings out the documents he exposed two years ago detailing an organized effort to create racial division and civil unrest in America funded by George Soros.