The stagecoach bounced along the uneven trail through Indian lands. A year ago there would have been danger from Indians. But Ulysses Grant had sent General Philip Henry Sheridan, who had brought the horrors of war to Confederate civilians, to annihilate the plains Indians. 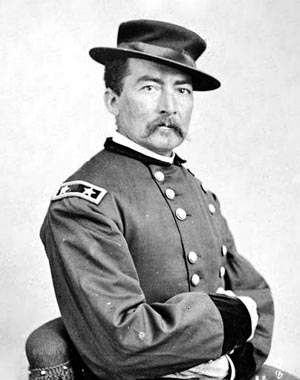 In his winter campaign of 1868-69, Sheridan attacked the Cheyenne, Kiowa, and Comanche tribes in their winter quarters, killing women and children and taking the Indians’ supplies and livestock. In Congressional testimony, Sheridan advocated the slaughter of the vast herds of bison in order to deprive Indians of food.

Having turned professional hunters loose on Indian lands, Sheridan wrote: “Let them kill, skin and sell until the buffalo is exterminated.” For his proficiency in war crimes, Sheridan was made commanding general of the U.S. Army.

When the first thud of the arrows hit the stage, the passengers screamed, “Indians, we will be scalped.” Among the passengers was a grizzled, hardened man. He retrieved an arrow and noting the metal arrowhead realized that it was not an Indian arrow and that the stage was being attacked by outlaws posing as Indians.

False flag attacks are as old as history.

“Bowie” Johnston had fought Indians all his life. He had more respect for them than he had for most white men. Unlike the other passengers, he understood that Indians would be blamed when whites preyed upon whites.

He also understood that seized with fear, the stage driver would urge the horses onward. The rough trail would mean no accurate shooting from the coach and likely a broken axel or lost wheel. An overturned and wrecked stagecoach would be easy pickings for the outlaws.

Bowie opened the stage door and swung up on top of the coach. With his Colt at the driver’s head, he ordered the driver to stop the coach. He seized the Winchester from the guard. When the coach stopped, he commenced firing.

His two shots took two of the raiders out of their saddles. The rest, realizing they were facing an experienced fighter, rode off.

The stage driver and guard and the other passengers were both angry and relieved.

“We thought you were with the Indians,” they exclaimed, “but you drove them off!”

“They weren’t Indians,” Bowie replied. Those were outlaws after the payroll, knowing that they would be home clear with the robbery blamed on Indians.”

One of the self-important passengers ejaculated, “Why are you shielding those murdering savages. We know it was Indians. Look at all the arrows.”

“Mister,” replied Bowie, “I have been fighting Indians all my life. Look at this arrow. The feathers are not representative of any tribe. The arrowhead is metal. Indians have flint arrowheads. No Indian nation has a foundry or blacksmith. Come with me. Let’s go look at the two I killed.”

Reluctantly, the passengers accompanied Bowie, who wiped the war paint and grease from the dead men’s faces. A uniform gasp was emitted from the driver, guard, and passengers. All could see that a false flag attack had been perpetrated upon the stagecoach.

Bowie told his now attentive audience, ” this attack was intended to bring retribution upon demonized Indians. Innocent Indians would have been massacred while white men rode away with the money. Bowie removed the arrows from the stagecoach and put the metal tips into his pocket. We will take the bodies with us as evidence against further depredations against the Indians.

Bowie contemplated his life. He had been a man ever since a plains grizzly had struck down his horse and ripped him and his saddle off his horse’s back. Faced with a massive killing machine, the 185 pound man armed with a bowie knife felt small indeed. Bowie had been able to inflict enough wounds that the grizzly abandoned the attack.

This article first appeared at Paul Craig Roberts’ new website Institute For Political Economy.  Paul Craig Roberts was Assistant Secretary of the Treasury for Economic Policy and associate editor of the Wall Street Journal. He was columnist for Business Week, Scripps Howard News Service, and Creators Syndicate. He has had many university appointments. His Internet columns have attracted a worldwide following.