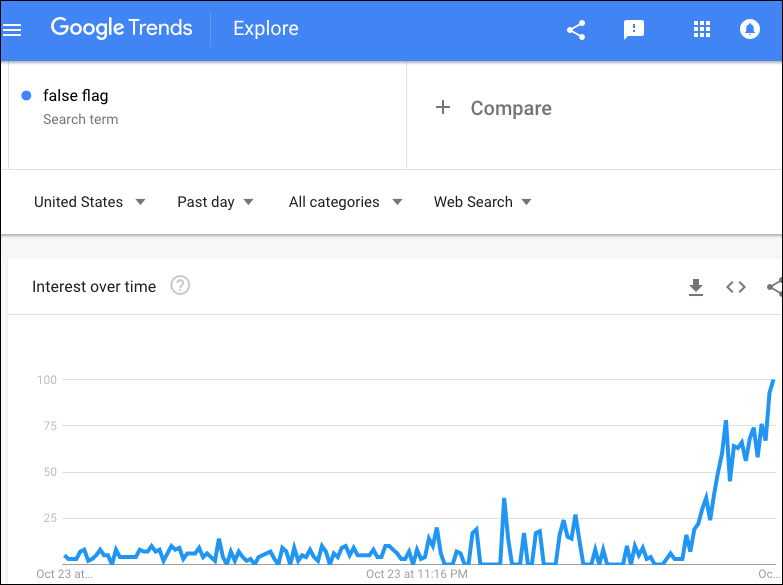 While a suspect has not been named and there is no evidence to support the theories, several Twitter users are certain the bombs, including one mailed to media outlet CNN, are dirty Democrat tricks pulled off to sway public opinion ahead of the midterms.

Searches for the term “false flag” skyrocketed after news of the bombs Wednesday morning, according to Google Trends analytics.

The term “false flag” refers to instances in which an entity stages an attack against themselves in order to blame political adversaries.

The George Soros false flag is especially funny because US liberals are 1. dumb enough not to realize this was done by a leftist to affect the midterms and 2. crazy enough to actually consider Soros a philanthropist, not the ultra rich old greedy miser he is.

False flag attacks have been common for centuries.

Given any act of apparent political terrorism, journalists should always be asking:
Why these targets?
Why this timing?
Who really benefits?
Could this be yet another false flag?

These "Suspicious Package" stories are false flags, carefully planned for the midterms

#FalseFlag – Don’t be fooled people. These “assasination” attempts are being manufactured to make Trump supporters look radical right before the midterms https://t.co/TT7xJ3d5oj

This is nothing more than a "false flag" attack orchestrated by the mob left. They are getting desperate.

I'm calling it now…this is a false flag by the dems to get more dems to vote for them. If it isn't a false flag, I will be shocked.

These suspicious packages are a false flag event and it is so obvious. Watch CBS live they are already switching from reporting what happened to trying to "profile" who might have done this. Over the next few hours guaranteed-going to try to say it is Republicans/MAGA supporters.

Don’t be fooled, this bomb sent to #CNN is a #FalseFlag event orchestrated by CNN itself, conveniently timed just two weeks before the #Midterms just as the #MigrantCaravan is as well pic.twitter.com/BZoBGTlv14

Meanwhile, others on Twitter concluded with certainty the attacks were definitely not false flags, but speculated right wing domestic terror or President Trump could be behind the attacks.

If your first reaction to some evil person sending bombs to a variety of politicians on one side of the aisle is "FALSE FLAG," you are officially deranged.

InfoWars is already calling it a false flag. Incidentally, various conspiracy theorists and QAnon types have been going wild for the past few days with "rumors" (i.e. a random internet post) that said Soros would stage a false flag attack on a Democratic rally. pic.twitter.com/2klvkLM3Y3

Trump and the Republican Party are responsible for this behavior! #clinton #obamas #cnn pic.twitter.com/i0tZiRVjiZ

Get the fuck out of here! Trump is 100% responsible for the hate filled atmosphere in this country and the @GOP stands by and allows him to do it! He just said in his latest racist rally that George Soros funded the caravan in Mexico and now a bomb shows up at his house.

After several social media giants coordinated to de-platform Infowars in August, radio host Alex Jones predicted the banning of his website foreshadowed Democrat false flag attacks that would be pulled off ahead of the midterms, specifically forecasting an attack against CNN.

This is a developing story.

Alex Jones covers this live on the Wednesday, October 24 edition of the Alex Jones Show: