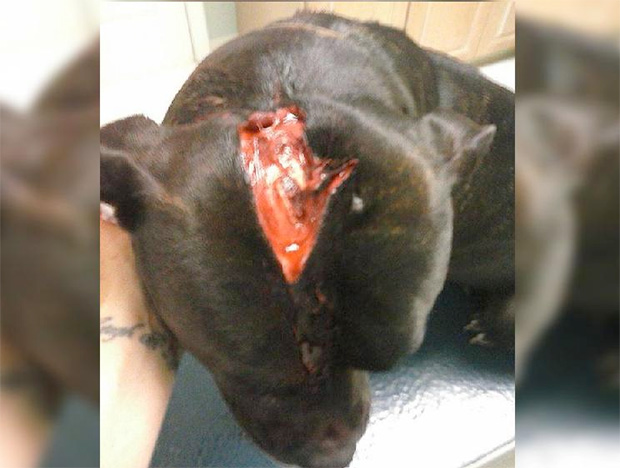 A family was traumatized when gun-wielding police officers walked onto their quiet property and shot their dog in the head while looking for a man who did not live there.

Megan Shimburski, 25, was spending a quiet afternoon with her children at her parents’ countryside East Concord residence on July 25, 2014. It was a normal day, she said, which involved watching her 5-year-old daughter play behind the house with their dog, as her infant son lied in a playpen inside the house.

Ms. Shimburski’s parents, John Shimburski and Martha Spaulding, were not at home when the day turned to chaos.

At around 2:00 p.m., Ms. Shimburski recalled that she ducked inside the house for a moment to use the restroom. She became alerted to something occurring when the family’s two dogs began barking; one was inside and one was outside the house.

Ms. Shimburski said that she looked out the window and saw two vehicles parked outside — a car and an SUV — along with unidentified men, one of whom had a gun drawn.

Panicked, she rushed outside toward danger to attend to her daughter, Makenna, who was accompanied by “Lady,” a 2-year-old Brindle Pit Bull.

The armed stranger had just shot the family’s beloved pet in the head, with Makenna standing “20 feet behind [the dog] in the exact same direction.”

“He then proceeded to continue walking up the hill with his gun raised, and I screamed at him not to shoot his gun again,” she added.

Ms. Shimburski says that there was no clear indication of who the intruders were; there were no markings on the vehicles and the three men were not in uniforms. She described them as dressed in “business attire” — definitely not uniforms.

“I stated that I was going to call the police, and that’s when they said, ‘We are the Erie County Police,’” Ms. Shimburski recalled.

The men began then began to request to enter her parents’ home. Ms. Shimburski declined, and tended to her children and dogs. Lady was bleeding profusely. Makenna was cowering nearby crying, “The man shot Lady. He shot my dog.”

As Ms. Shimburski took her daughter inside, she discovered that two of the self-described “officers” had already entered her parents’ home, after she had explicitly told them to stay out.

“They were yelling at me to tell my daughter it was OK,” she said.

The young mom secured her daughter in a bedroom along with the second dog that had been indoors. Her parents quickly arrived after being notified about what had happened.

The reason for the intrusion was finally made known when they announced that they were looking for the father of Ms. Shimburski’s son. The family told the officers that the man they were seeking had never lived there, didn’t receive mail at the address, and that they should have tried looking for him at his own home.

The police had not brought a warrant, and said they only wanted to ask the man some questions. They continued to request a search of the home.

Meanwhile Lady, described as a “67-pound big baby,” was hiding under the deck, covered in blood. A bullet had traveled through the tissue on her head, neck, and shoulder. A large, open gash allowed blood to pour down her face into her eyes and nose. It was a shocking sight for the family.

“The officer stated that he had just ‘grazed’ her, and that she would be fine,” Ms. Shimburski recalled. “I looked at him and said, ‘You did not graze her!!’ His words were, ‘I didn’t mean to GRAZE her.’”

The shooter — [later identified as Erie County Sheriff’s Detective Greg McCarthy] — claimed he shot in self-defense because the dog was “charging and barking.” Ms. Shimburski says that he exaggerated the dog’s actions and the distance he was standing from her when he fired. No one was bitten or in danger, she said, and the dog was coming from the back to the front of the house to investigate the strange visitors.

“My child could have been shot,” Ms. Shimburski said to Police State USA. “She now has the idea that these people who were there to protect people are bad people,” and added that she may need counseling. “I stated that not all cops are bad but at this point I don’t think she’s going to trust them.”

Lady ultimately survived, after an emergency surgery, 60 metal stitches, and $1,200.00 in veterinarian bills.

“The police did not leave names or numbers, nor did they show any remorse,” Ms. Shimburski said. In fact, she had been left with no paperwork; no business card; no record whatsoever of what had happened.

Regardless, the family attempted to get past the incident. Young Makenna dealt with confused feelings about the shooting and Lady slowly recovered from her injuries at home. Ms. Shimburski did not even have a confirmed phone number to call regarding the incident. Until 11 days later…

The family found that their troubles were not yet over on August 5th, when police returned for another visit. This time, they brought paperwork: a document that read “Order to Seize Dog.”

The Erie County Sheriff’s Office, unsatisfied that Lady had survived the first encounter, had sought out another legal method of killing her. Describing Lady as “dangerous dog — pit bull,” the document authorized deputies to “seize the said dog harbored by the said Megan Shimburski” and to “hold, care for, or dispose of” Lady, pursuant to New York’s Agriculture and Markets Law, Article 7, Section 123.

The deputy and an animal control officer took Lady away to the animal warden, leaving her with an uncertain fate. Pending a court date on August 12th, Lady may be euthanized if found to be a “dangerous dog.”

The document was signed by Gene R. Heintz, Justice of the Town of Sardina. It also confirms that the men at the property on July 25th were Erie County Sheriff’s Office detectives Graham, Noecher, and McCarthy. The man who shot Lady was Detective Greg McCarthy.

“I am outraged and disgusted by their behavior,” Ms. Shimburski said in an interview. “They put my child’s life in danger because of their negligence. Lady did not deserve this in any way because she is not in any way a dangerous or aggressive dog.”