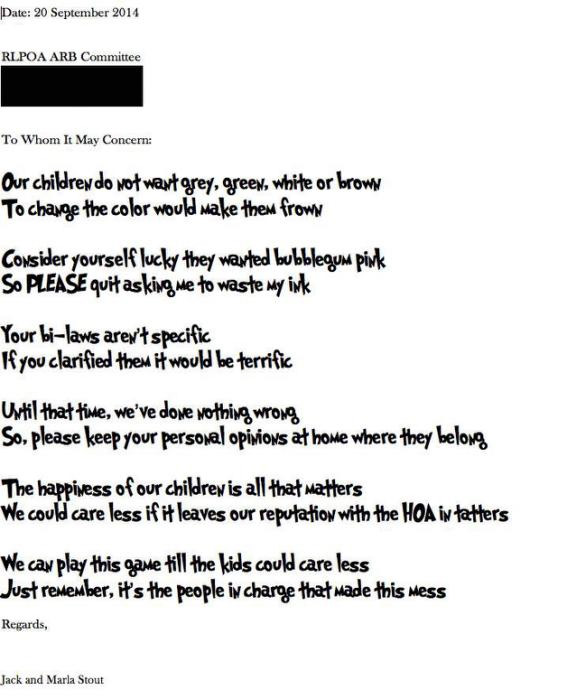 A purple-colored child’s play set is at the center of a dispute which has a Missouri family defending itself from a lawsuit and possible jail time.

The fray started last year when Lee’s Summit residents Jack and Marla Stout were accused by their neighborhood’s Home Owners Association of not having the required approval to erect a swing set.

Like many parents, the Stouts had allowed their daughters, ages 8 and 5, to choose the color of their play house. The girls reportedly wanted a “girly” color and chose purple, prompting a complaint.

The Stouts challenged the complaint at an appeals hearing and won, which “should have ended the process,” according to Marla Stout.

But the Raintree Lake Property Owners Association’s Architectural Review Board continued to insist the set’s paint was not in “harmony with other colors of the community.”

“Colors had to be harmonious with community,” Marla told Yahoo. “There are over 2,000 homes in Raintree. Pick a color, any color, it’s here. We have swing sets in place with multicolored canopies, huge yellow slides, etc. Ours blends with the trees and is shaded by four large trees. We honestly had no idea we’d done something wrong.”

When the Stouts demanded a list of approved colors, they were told one did not exist. They say they even brought up suggestions which the HOA refused.

The Stouts later found out the complaints originated from a codes enforcer and not from any of their neighbors.

“They claimed that it started with a written complaint from one of our neighbors,” Marla said. “We know now that it was reported by our codes enforcer, a guy who is not a resident and is a paid employee of the association. He brought it to the attention of the office manager, another nonresident paid employee, and it spiraled from there. I have neighbors on my block that said she tried to get them to actually file a complaint and they refused because they love the set.”

The family had made it apparent they would not remove or repaint the structure. That’s when the housing authority procured a law firm which issued the Stouts a threatening letter.

“Failure to respond to any anticipated court ordered injunction directing your removal of the swing set could result in your being held in civil contempt of the court’s order which would bring with it a daily fine or jail time until the swing set was removed, as ordered,” a missive from the office of Ensz and Jester says.

“If you do not remove the swing set within the next couple of weeks, the Board has requested that I file the lawsuit against you. The ultimate cost to you will be far greater than any principle you are trying to prove.”

The Stouts believe the board’s anger ultimately stems from a serious, but light-hearted letter they sent the HOA back in September highlighting the association’s vague bylaws, written entirely in rhyme:

One neighbor expressed to KMBC News the HOA was taking things too far.

“I’m really perturbed that they would waste money pursuing something like this, to attack good people like this and to go after a swing set,” he said.

Earlier this week a number of residents turned up at the HOA’s monthly meeting, some wearing shirts promoting the hashtag #PurplePower, and demanded they drop the lawsuit against the family.

The Stouts have a court date set for August 21, according to Yahoo.