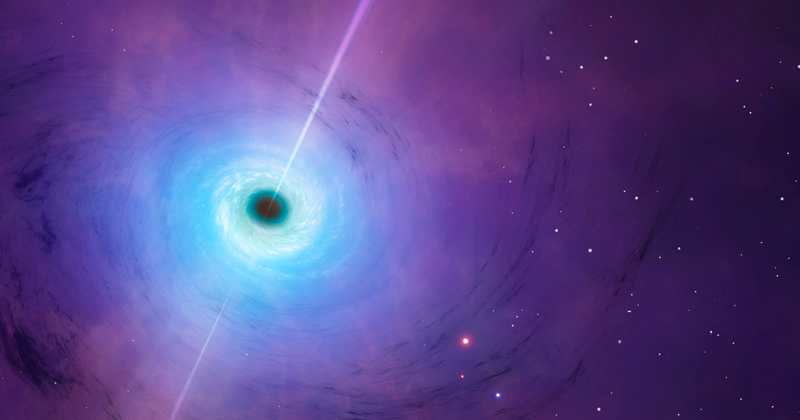 In another major milestone, the world’s most famous black hole has been spotted blasting out beams of particles at speeds greater than 99 percent of the speed of light.

In recent years, NASA scientists have been perplexed by matter that seemed to be traveling so fast that it appeared to break the laws of physics. However now, thanks to the photogenic black hole at the center of the Messier 87 galaxy, they have finally gotten to the bottom of the mind-bending celestial speed demon.

The Event Horizon Telescope Collaboration released images of the black hole, the first ever photographed, to much fanfare last April. While sifting through data from observations made in 2012 and 2017, scientists from the international partnership observed a jet of high energy particles and matter being blasted from the center of the black hole at apparent speeds of 6.3 times and 2.4 times the speed of light.

Now, this black hole, located some 55 million light years away, is truly gargantuan, with a mass of about 6.5 billion times that of the sun, so its gravity packs quite a punch, but surely not one that could defy the laws of the universe itself?

Boffins have finally unraveled the peculiar mystery and the answer lies in a strange occurrence called superluminal motion.

“One of the unbreakable laws of physics is that nothing can move faster than the speed of light,” explained one of the paper’s co-authors Brad Snios, of the Harvard & Smithsonian Center for Astrophysics (CfA). “We haven’t broken physics, but we have found an example of an amazing phenomenon called superluminal motion.”

Superluminal motion occurs when an object is close to our line of sight, making it look like it is somehow breaking the laws of physics because the source of the light appears to constantly overtake the incoming light as we observe it.

The incredible speeds were clocked through analysis of the particle stream in radio, optical wavelengths. But when researchers using Chandra’s x-ray instruments tracked two beams blasted from the black hole at relativistic speeds about 900 and 2,500 light years away from the region, they were able to crack the mystery.

Using this “cosmic speed gun” method, the scientists discovered that the particles could travel at more than 99 percent of the speed of light, but they could not outrun physics itself.

“It’s like the Event Horizon Telescope is giving a close-up view of a rocket launcher,” said the CfA’s Paul Nulsen, another co-author of the study, “and Chandra is showing us the rockets in flight.”