Brexit architect Nigel Farage suggested those who advocate accepting acts of terrorism as a normal part of daily life in Western countries are guilty of appeasement and surrendering to Islamic terrorists. 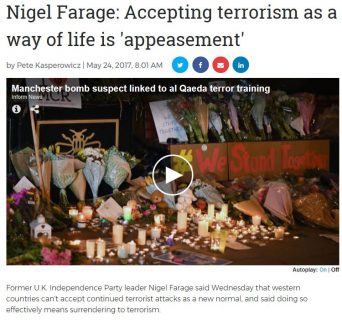 “We’ve got to stand strong and say, we are going to stamp out radicalization in our schools, in our prisons and elsewhere,” he added. “We will stop people on terror lists from leaving our country and getting trained in Syria, and we’re going to do something about this.”

Farage also expressed agreement with President Donald Trump’s recent categorization of terrorists as “evil losers in life” rather than as “monsters.”

“I think for every reason, it’s the right term and we should all go on using it,” Farage said.

Farage’s equation of accepting acts of terrorism as a normal part of daily life in Western countries with appeasement and surrender stands in direct contrast with many in the mainstream media, as well as with past comments from London Mayor Sadiq Khan.

During an appearance on MSNBC’s Morning Joe on Tuesday, BBC host Katty Kay suggested Europeans must get used to more terrorist attacks as ISIS is gradually defeated in Iraq and Syria.

“Europe is getting used to attacks like this, Mika. They have to, because we are never going to be able to totally wipe this out,” Kay said. “As ISIS gets squeezed in Syria and Iraq, we’re going to see more of these kinds of attacks taking place in Europe and Europe is starting to get used to that.”

London Mayor Sadiq Khan, in the aftermath of a bombing in New York City in September, 2016, suggested such attacks are “part and parcel” of living in a “global city.”

“Part and parcel of living in a great global city is you’ve got to be prepared for these things. You’ve got to be vigilant. You’ve got to support the police doing an incredibly hard job,” Khan said in regards to the bombing in New York City’s Chelsea neighborhood that left 29 people injured.