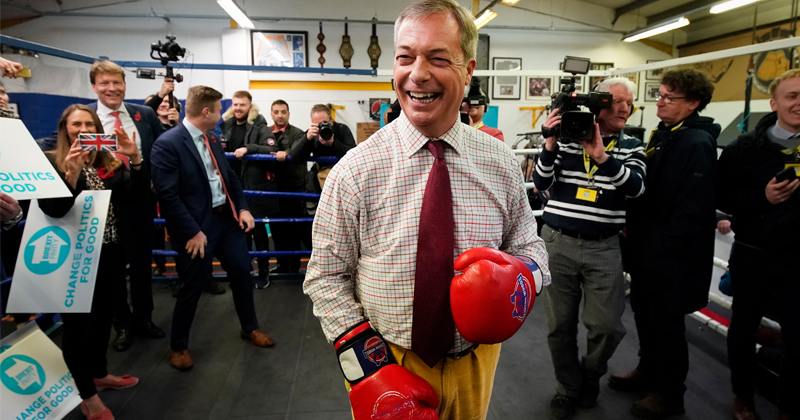 But in a development that threatens to destroy his Tory-led coalition, Brexit Party leader Nigel Farage has dashed rumors about a possible Tory-BP alliance.

Instead of holding back and focusing on Labour-held seats in districts that favored Brexit during the referendum, Farage announced that his party will field candidates in more than 600 races, threatening to split the pro-Brexit vote and raising the possibility that Jeremy Corbyn could emerge as prime minister.

The latest note from a team of Deutsche Bank analysts focused on Brexit recounted that, over the weekend, a series of polls showed that the two establishment parties appear to be gaining support, suggesting that December’s general election could be more of a two-party race than analysts and investors had initially expected. Still, Farage’s decision threatens to throw a wrench into the works.

We have 600+ candidates who are undaunted, enthusiastic and 100% ready to campaign for a proper Brexit across our nation.

They know @BorisJohnson’s deal is not Brexit and it does not get Brexit done.


Farage’s decision comes after he personally decided to sit out the race (Farage doesn’t exactly have a great track record when it comes to running for the House of Commons: He’s tried and failed eight times already). In an interview with the BBC over the weekend, Farage concluded that he could advance the country’s exit from the European Union better by campaigning on behalf of his populist party’s other candidates than by contesting a seat himself.

Farage added that he would campaign aggressively against Johnson’s withdrawal agreement following the PM’s “broken promise” to leave the EU by Oct. 31. The withdrawal agreement is the crux of Johnson’s election manifesto. Labour also opposes Johnson’s deal, and has said that, if Corbyn ousts Johnson, he will return to Brussels to negotiate a new deal, then put it to the public in a second referendum, which could result in Brexit being canceled in its entirety.

“There are so many Labour-Leave seats…represented by remain member of Parliament…and we view those constituencies as being absolutely among our top targets,” Farage said late last week during the BP’s campaign launch.

Some pro-Leave pundits will no doubt be alarmed by Farage’s decision.

This illustrates the big problem Brexiteers will be up against at the forthcoming election.

We need Boris and Farage to work together but under Farage’s current terms, this seems impossible. https://t.co/IQEFlMj80h


One senior Tory backbencher griped to the Telegraph that Farage now risks becoming “the man who threw away Brexit.”

The pound tumbled to its lowest level of the day on the news.