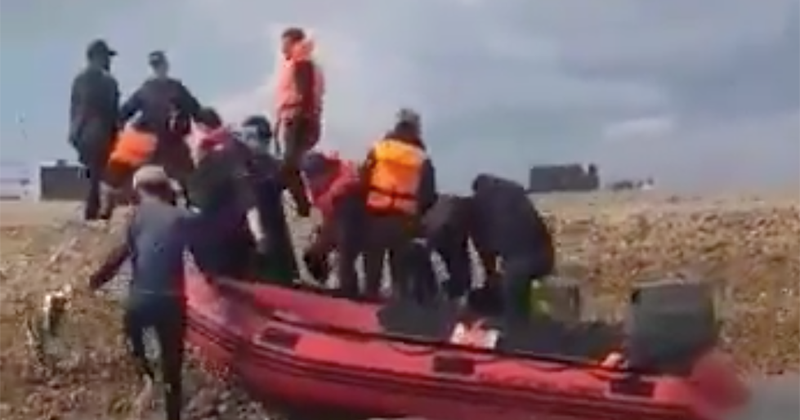 A monthly record of more than 1,450 illegal aliens crossed the English Channel and landed on British shores in August.

Analysis by the British news wire agency Press Association found that last month’s illegal arrivals were almost as many as June and July combined, at nearly 1,500. The report also revealed August 6th to have had a record-breaking 235 illegal aliens crossing from France to the UK in one day.

Over 5,000 illegals mostly hailing from the Middle East, Asia, and Africa have arrived in the UK since January. This number does not include those who came undetected, without being intercepted by authorities.

The east Kent port town of Dover — a frequent landing spot for illegals — saw more arrivals on Tuesday, with some being brought to shore by UK Border Force’s patrol boat, Hunter.

Elected politician-turned investigative journalist Nigel Farage shared exclusive footage of migrants in a small motorised boat who landed ashore and dispersed, likely to disappear into Britain’s black economy, and unlikely to be registered with the Home Office, let alone be sent back to France.

“Chaos in Kent today,” Mr Farage remarked, before criticising the mainstream media for failing to “talk[] about the migrant crisis, but the invasion continues”.

The media have stopped talking about the migrant crisis but the invasion continues.

See this exclusive footage, many on the run. pic.twitter.com/elObL4r9Yc

Owen and Dan Lyman cover recent European news including the massive second anti lockdown protest in Berlin, this time twice the size of the first.