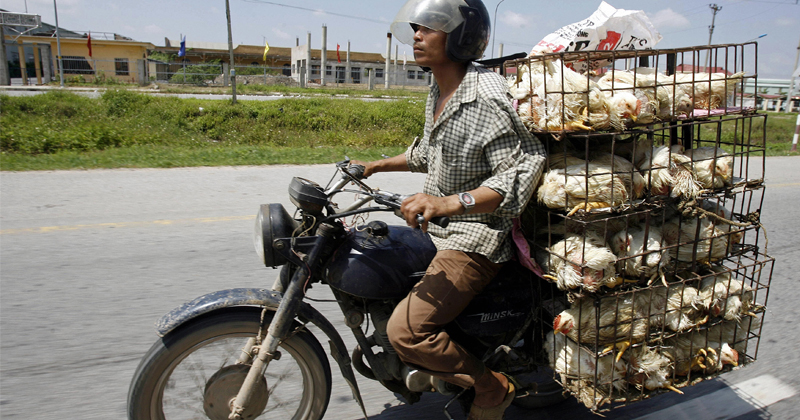 Small-scale poultry farmers in Vietnam tend to respond to viral outbreaks of highly pathogenic avian influenza (HPAI) by rapidly selling their birds as a way to avoid financial loss, according to a new study by an international team of researchers.

As these birds are commingled with other birds in markets and trading networks, this practice may increase the likelihood of widespread disease transmission. The findings could have implications for government policymaking in the many regions of the world where small-scale poultry farming and avian influenza risk co-occur.

“Avian influenza is deadly to humans, with a case fatality rate between 25% and 50%,” said Maciej Boni, associate professor of biology, Penn State. Fortunately, reports of human-to-human transmission over the past 15 years have been either absent or anecdotal. COVID-19 took us by surprise, but with HPAI we have a known threat with the potential to become pandemic. If we ignore the active role that poultry farmers play in the control and dissemination of avian influenza, we may miss another opportunity to curtail an emerging disease outbreak at a stage when it is still controllable.”

Lead author Alexis Delabouglise, an animal health economist at CIRAD-Agricultural Research for Development in France who was a postdoctoral scholar at Penn State when the research was performed, explained that small-scale poultry farming is practiced by millions of Vietnamese households and by millions more throughout southeast Asia, mostly on a scale of fewer than 100 birds per farm. These farmers make decisions on a daily basis — often in response to economic incentives — about when and where to sell their flocks. And their decisions can influence disease spread.

“If the price of poultry goes up, farmers might expand their farming activities, which could create more outbreak risk,” said Delabouglise. “If there is an outbreak on a neighboring farm, they might choose to sell their poultry early to avoid their own birds from being infected and to avoid lower prices. And if there is an outbreak on their own farm, the evidence in our study shows that they would be likely to sell their birds early to avoid both monetary loss and epidemiological risk.”

Boni and colleagues, including researchers at the Oxford University Clinical Research Unit (OUCRU) in Ho Chi Minh City, conducted a longitudinal study of small-scale poultry farms in the Mekong river delta region of southern Vietnam with a goal of characterizing the effects of disease outbreaks on poultry harvest rates, as well as on two prevention practices — vaccination and farm disinfection. The team followed 53 farmers and their management of more than 1,000 poultry flocks for a period of two years — from 2015 to 2017.

“Working with partners in endemic countries day-in and day-out on study details and public health priorities is key to establishing collaborations that allow these long-term follow-up studies to succeed,” said Boni, who led a research group at OUCRU for eight years.

Delabouglise, the statistical lead on the project, used mixed-effects general additive models to investigate farmers’ probabilities of harvesting — either selling or slaughtering — flocks, of performing avian influenza vaccination on flocks that were not previously vaccinated and of disinfecting farm facilities when faced with an outbreak. Their findings appeared in eLife on August 25.

“We found that farmers did send their chickens to market early when there were outbreaks occurring on their farms,” said Delabouglise. “Specifically, small-scale farmers increased their harvest of broiler chickens by 56% during outbreaks with no sudden deaths and by 214% during outbreaks with sudden deaths. This has the potential to exacerbate the outbreak and spread the virus even further.”

The team noted that sudden deaths — the deaths of chickens less than one day after the onset of clinical symptoms — are considered to be indicative of HPAI infection. Interestingly, the team found that the probability of disinfection was not affected by the occurrence of outbreaks.

Finally, the team found that the likelihood of vaccination against avian influenza strongly increased with flock size. The probability of vaccination was almost zero for flocks of 16 birds or fewer and nearly 100% for flocks of more than 200 birds. According to Delabouglise, one reason that millions of small-scale poultry farmers may not be vaccinating their birds could be their desire to avoid transaction costs associated with declaring flocks to governmental veterinary services before vaccination. Another reason could be that due to their small size, their vaccination status is not controlled and, therefore, vaccination is less worthwhile from the farmers’ perspective.

“Crucially, it is these smaller flocks that are more likely to be sold into trading networks during outbreaks,” he said. “The rapid sale of sick birds can contaminate other birds at traders’ storage places and those at live bird markets. It also exposes consumers and traders, slaughterers and retailers to an increased risk of infection.”

Delabouglise noted that, on the flip side, a massive arrival of underage birds in a live bird market, or a price decrease due to the temporary oversupply of poultry, may be a sign that an outbreak is occurring.

“This is an interesting area for surveillance of livestock diseases,” he said.

Delabouglise said that the team’s results could help governmental agencies create policies that aim to avoid the spread of HPAI.

“Small-scale farmers could play an active role in the control of emerging infectious diseases if they are given the opportunity to depopulate their farm upon disease detection without disseminating pathogens in trade circuits,” he said. “Policymakers could encourage the establishment of formal trade agreements that encourage such ‘virtuous’ management of disease outbreaks in poultry.”

One such “virtuous” management strategy could be for farmers to sell their sick chickens as feed for pythons and crocodiles raised on neighboring farms. Another could be to set up agreements with neighboring large commercial farmers who can give them financial indemnities to destroy the birds as a way of protecting their own flocks.

“It would be impossible to have reliable public-health control over the millions of small-scale poultry flocks in a place like Vietnam,” said Delabouglise, “but providing economic incentives to responsibly manage birds during disease outbreaks is feasible.”

The Defense Threats Reduction Agency, the Wellcome Trust and the Pennsylvania State University supported this research.