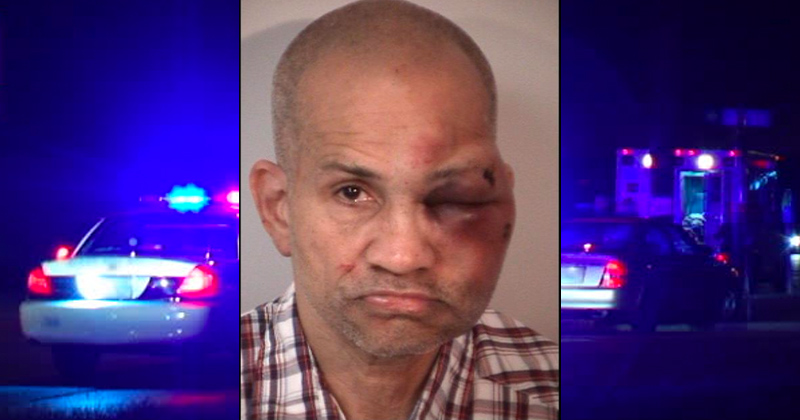 An alarming mug shot documents the extent of a man’s injuries after he was nearly beaten to death by a father who allegedly caught him naked in his toddlers’ bedroom.

The incident unfolded in Spotsylvania, Virginia, on Sunday morning, when the father, who went to check on the children around 6:30AM, encountered Mark Stanley, 60, naked from the waist down standing over the children, ages 2 and 3.

“When the family member opened the children’s bedroom door, he found the suspect, Mr. Stanley in the room with the children nude from the waist down,” reads a statement from the Spotsylvania Sheriff’s Office.

Police found the father with a handgun when they arrived.

Sheriff’s Capt. Liz Scott told the The Free Lance-Star the father was so upset police essentially “had to rescue the suspect from further injury after responding to a 911 call.”

“Scott said the father had already obtained a weapon and that deputies may have saved the suspect’s life,” reports The Star.

Police say Stanley, who is from North Carolina, was in Virginia visiting family for the holidays.

Stanley faces two charges of indecent liberties with a child and one count of domestic assault.

The children were taken to the hospital for evaluation, which could result in more charges being brought against him.

The father was not charged.