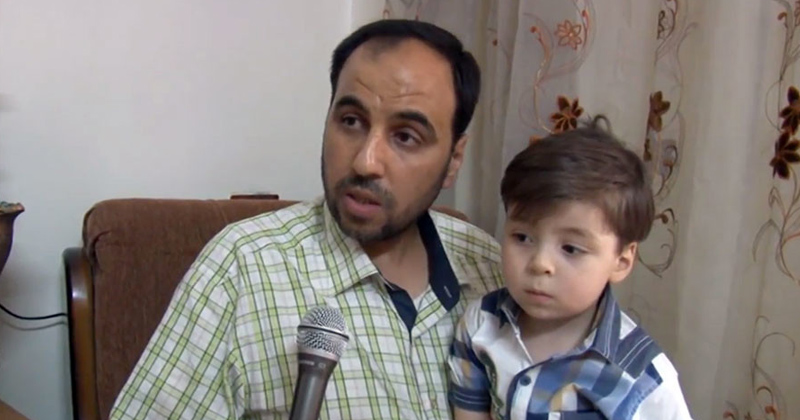 The father of Omran Daqneesh, the blast-stricken but otherwise perfectly healthy 4-year-old child dubbed ‘Aleppo boy’ by western media outlets, came forth last week to talk about how the media lied about his son and distorted facts about the attack which took place on the evening of Aug. 17, 2016, in Aleppo’s Qaterji District, where Omran was injured and his 11-year-old brother Mohammad was killed while he was taking out the rubbish.

As pictures of the slightly wounded but filthy 4-year-old seated in an ambulance circulated the mainstream, Omran quickly became the corporate media’s poster boy as the general public ate up skewed reports which made the boy’s injuries appear to be far worse than they actually were.

To boot, a good portion of the media blamed the attack on the Russians, who are generally meticulous about not carrying out airstrikes in residential areas, while other outlets claimed that the airstrike was conducted by the Syrian military, adding to the confusion.

Even more notable was CNN journalist Kate Bolduan’s emotional performance live on-air when she reported on the boy’s injuries one day after the attack. During the broadcast, in an attempt to captivate her audience, Bolduan can be seen nearly breaking down into tears and sniffling as video imagery of a soiled and bloody, yet perfectly coherent, Omran was shown to viewers.

The original footage was captured by the Aleppo Media Centre (AMC) which mostly relies on Al Qaeda sources and its Western funding to push the ‘rebel opposition narrative,’ as reported by Eva Bartlett.

“Mahmoud Raslan, the photographer responsible for the viral photo of Omran, is known to be close to terrorists of the Nour al-Din al-Zenki faction, who are most widely known for their methodic beheading of Palestinian child Abdullah Issa in July 2016. After Issa’s slaughter, photos emerged of a grinning Raslan taking a selfie with some of the al-Zenki murderers,” Bartlett wrote for MintPress.

If u doubt that Raslan took photo, see him taking pics & wearing same shirt as he wore in selfie w/beheaders #Syria pic.twitter.com/TNcHlyDNB1

On June 5, 2017, Omran’s father, Mohammad Kheir Daqneesh, decided that it was time to speak out and let others know how iconic imagery of his son was exploited by the corporate media to push selective and directional political agendas.

Clearing up the record, Omran’s father said that his son’s injury was only mild and that it was a volunteer of the White Helmets who placed him in the ambulance where the infamous photos were taken which made his injuries appear far worse than they really were.

Additionally, Daqneesh reported that he didn’t hear an airstrike that evening when “rebels” arrived nearby and said that everything just turned dark.

“We were at our home in the Qaterji neighborhood when the strike happened. What caused it, I don’t know – we didn’t hear any sound[s] of airplanes or bombing. Suddenly everything went dark. Thank God, [Omran’s] injury was a light injury, very light. But they exaggerated and made a big deal out of it. I was also lightly injured on my head and arm, but [they were] very mild injuries,” he said. “My son Mohammad Ali was taking the trash out when suddenly the incident occurred and he was hit by rubble. His hands were injured and he suffered internal bleeding.”

Daqneesh is a father of 6.

Shepard Ambellas is an opinion journalist, analyst, and the founder and editor-in-chief of Intellihub News & Politics (Intellihub.com). Shepard is also known for producing Shade: The Motion Picture (2013) and appearing on Travel Channel’s America Declassified (2013). Shepard is a regular contributor to Infowars. Read more from Shep’s World. Get the Podcast. Follow Shep on Facebook and Twitter.