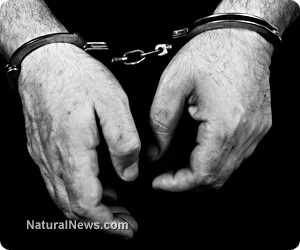 A U.K. father has been sentenced to life in prison after being falsely accused of murdering his own daughter, who reportedly developed mysterious head injuries just one day after receiving the high-risk measles, mumps and rubella vaccine, more commonly known as MMR. Investigative journalist Christina England reports that the father was basically denied his right to defend himself with evidence and witnesses and instead just assumed by the court to have shaken his baby to death with no real proof to support these allegations or the final judgment.

Known around the world for her expertise in vaccine adverse effects, England stepped in to try to help the father after he and his wife recently came forward asking for help. The father was already on trial for murder at the time, and just two weeks later was sentenced by the court to life in prison. But the story leading up to his false conviction needs to be told, because, with enough publicity and support, this father may be able to appeal his conviction and actually have a legitimate day in court.

Little Amy develops major head lump after MMR vaccine
It all started back in May of 2012 when the child in question, who is being referred to as Amy in news reports, developed a strange lump on the back of her head just one day after receiving the MMR vaccine. Prior to the vaccine, little Amy was healthy and lump-free. Amy’s father Darryl took her to the local hospital to have the lump checked out but was unable to provide answers as to how it formed, which was the beginning of his subsequent horrors.

During her hospital visit, doctors noticed that little Amy also had a strange bruise on her leg, which they immediately assumed without any evidence whatsoever was the result of child abuse. This was later proven to be false, but little Amy continued to suffer unexpected falls at home, one in the bathtub and one off the couch, the latter of which resulted in her death.

Little Amy’s symptoms documented as potential adverse effects of MMR vaccine
Each of these symptoms, the bruise, the lump and the falls, has been scientifically documented as a possible adverse event from vaccines, which should have been considered in the trial that followed. But Darryl was instead accused of shaking little Amy to death, resulting in her dying from so-called “Shaken Baby Syndrome,” or SBS.

Though Amy had no external injuries when she died, the U.K. court that heard the case arbitrarily decided that Darryl was guilty of shaking his daughter to death. And thanks to the incompetency or flat-out corruption of his own lawyer, Darryl was ultimately blocked from presenting any evidence whatsoever in his defense, including scientific papers that point to vaccine adverse events as the possible cause of his daughter’s death.

“Bruising and easy bleeding is one of the characteristic signs of the blood clotting disorder, thrombo-cytopenia — a recognized side-effect of many vaccines,” writes Dr. Viera Scheibner in a paper entitled “Shaken Baby Syndrome — The Vaccination Link.” “Its first signs are easy bruising and bleeding and petechial (spot-like) rash.”

Amy’s unexpected falls could have been the result of vaccine injury
In the same paper, Dr. Scheibner also adds that vaccine-injured children can develop the same type of bulge on the head, known as a bulging fontanelle, that little Amy seems to have developed the day after receiving the MMR vaccine. It is possible, in other words, that little Amy suffered from both thrombocytopenia and a bulging fontanelle, something the courts and the family’s own lawyer refused to allow as evidence.

Beyond this, these two conditions can also cause children to experience “unexplained falls,” which is exactly what little Amy suffered on numerous occasions prior to her death. A shockingly high number of vaccinated children — as much as a one in 350 risk, depending on how many vaccines a child receives at one time — develop the type of convulsions responsible for unexplained falls, another piece of evidence rejected by the court.

England hopes that Darryl will appeal the case on the grounds that he was prevented from properly defending himself, due in large part to the failures of his own lawyer. The fact that even the possibility of a link between MMR and little Amy’s death was denied by the court proves that the trial was a fraud.

Be sure to read Darryl’s full story at:
http://www.missecoglam.com.