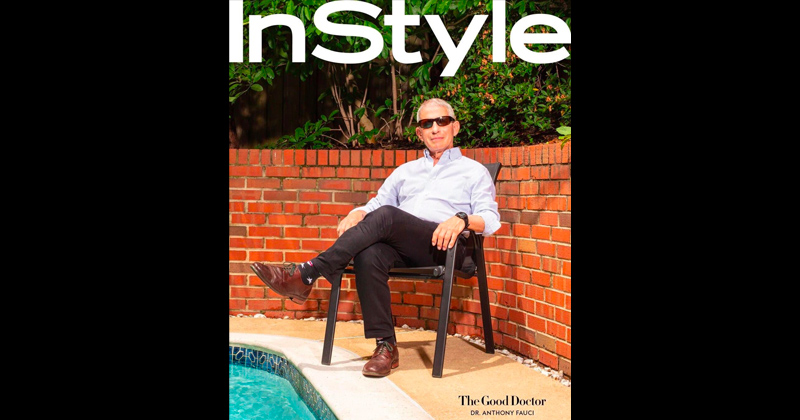 A new edition of InStyle magazine features Dr. Anthony Fauci on its cover.

Fauci, the National Institute of Allergy and Infectious Diseases head who also sits on the president’s coronavirus task force, appeared on the cover of the magazine’s digital edition last week where he addressed rumors of his contentious relationship with Trump.

A special digital cover: Dr. Anthony Fauci and his wife, bioethicist Dr. Christine Grady spoke to @NorahODonnell about the battle against COVID-19, Fauci's contentious relationship with the White House and how he's staying sane (pro-tip: he power walks). https://t.co/CSM3KjFk3X pic.twitter.com/aNJno1CUkC

“Right now, with all due modesty, I think I’m pretty effective. I certainly am energetic. And I think everybody thinks I’m doing more than an outstanding job,” Fauci told the magazine, adding he cannot be fired from his role by the president.

The cover, which reads, “The Good Doctor,” features Fauci sitting in a lounge chair next to a swimming pool while wearing sunglasses.

Fauci also spoke to his confusing advice on face masks, which he initially told the American public were not necessary:

Norah O’Donnell: It’s been recently reminded to us by the White House that you advised against people wearing masks in public, and, of course, that was due to the surge because the concern was about saving PPEs for medical professionals. Do you regret that comment?

A F: No. I don’t regret anything I said then because in the context of the time in which I said it, it was correct. We were told in our task force meetings that we have a serious problem with the lack of PPEs and masks for the health providers who are putting themselves in harm’s way every day to take care of sick people. That’s what the dialogue was in the task force meetings, which led all of us, not just me but also [U.S. Surgeon General] Jerome Adams, to say, “Right now we really need to save the masks for the people who need them most.” When it became clear that the infection could be spread by asymptomatic carriers who don’t know they’re infected, that made it very clear that we had to strongly recommend masks. And also, it soon became clear that we had enough protective equipment and that cloth masks and homemade masks were as good as masks that you would buy from surgical supply stores. So in the context of when we were not strongly recommending it, it was the correct thing. But our knowledge changed and our realization of the state of the outbreak changed.

Critics argued the NIAID head should be worried about the current pandemic at hand, rather than posing for photos in a magazine dedicated to beauty tips, celebrity style and fashion advice.

“Why is Dr. Fauci doing modeling photoshoots for fashion magazine covers in the middle of a global pandemic?” asked Dr. David Samadi on Twitter. “By the way, where is his face mask? Is this appropriate behavior from America’s ‘top medical expert’? The world is laughing at us right now because of this.”

Why is Dr. Fauci doing modeling photoshoots for fashion magazine covers in the middle of a global pandemic?

By the way, where is his face mask?

Is this appropriate behavior from America’s “top medical expert”?

The world is laughing at us right now because of this. pic.twitter.com/WH3uZW0eyt


.
Others pointed out Fauci scored a front page InStyle magazine cover, while the nation’s First Lady Melania Trump, herself a former model, has not.

“First lady Melania Trump, a former fashion model, has yet to be featured for InStyle since becoming first lady, in stark contrast to her predecessor former first lady Michelle Obama, and, apparently, even Dr. Fauci,” Amanda Prestigiacomo wrote at the Daily Wire.

Yet Melania is still waiting…. 🙄 https://t.co/hZUNtz9Xu4

Over the weekend, Fauci blamed young people for driving the current surge of coronavirus cases in an interview with WebMD.

“They’re not going to get very sick. They know that. So what I think is happening is that, understandably, innocently, but not correctly, the younger individuals are saying, ‘Well, if I get infected, so the chances of it is that I won’t even have any symptoms, so who cares?’ That’s a big mistake,” Fauci said.

Alex Jones exposes the fake numbers being used to inflate case numbers to frighten Americans into submission, and what Trump is doing to take action against Fauci’s medical tyranny.