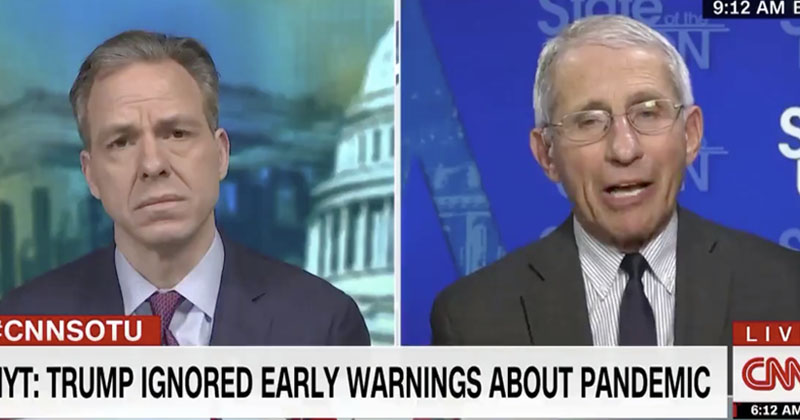 National Institute of Health director Dr. Anthony Fauci claimed that lives could have been saved had President Trump shut down the nation in February.

When asked by CNN’s Jake Tapper why the Trump administration didn’t lock down the nation sooner, Fauci suggested Trump didn’t listen to his advice.

“We look at it from a pure health standpoint. We make a recommendation. Often the recommendation is taken. Sometimes it’s not. But it is what it is. We are where we are right now,” Fauci said on CNN Sunday.

"We make a recommendation," said Dr. Anthony Fauci, when asked by @JakeTapper about reports that he and other top officials called for social distancing in February. "Often the recommendation is taken. Sometimes it's not. But it is what it is. We are where we are right now." pic.twitter.com/sw8xYZILB4

“Obviously you could logically say that if you had a process that was ongoing and you started mitigation earlier you could’ve saved lives, obviously,” he continued. “No one is going to deny that. But there was a lot of pushback about shutting things down back then.”

But here’s a clip of Fauci on Feb. 29 – the last day of the month – dismissing the severity of the COVID-19 outbreak and the notion the U.S. should be temporarily shut down to mitigate the virus spread – even advising Trump against imposing travel restrictions to and from China in January.

“Right now, at this moment, there is no need to change anything that you’re doing on a day-by-day basis,” Fauci said on the Today show. “Right now, the risk is still low. But this could change.”

This is what Fauci was telling the public on February 29 pic.twitter.com/RL45poVmS8

Why is Fauci contradicting himself?

The fact is, Fauci was one of the experts advising Trump not to take drastic measures to respond to the coronavirus outbreak, even as late as March.

Patrick Howley joins Owen to reveal the decades-long connections between Bill Gate and Anthony Fauci and how profits may explain their push for global medical tyranny.