Three Muslims were charged with performing female genital mutilations on young girls in the Detroit area.

Dr. Fakhruddin Attar, 53, and his wife, Farida Attar, 50, were arrested by federal officers this past week at their medical clinic in Livonia, Michigan, outside of Detroit. 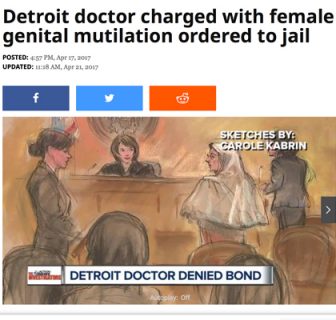 All three of them have ties to the Dawoodi Bohra, an Islamic sect which advocates surgically removing the clitoris from girls as young as six to suppress their sexuality.

The practice, however, is internationally recognized as a violation of human rights.

“An increasing number of females in the [Muslim] community worldwide have begun to speak publicly about FGM and the effects it has had on them and their families,” said FBI Special Agent Kevin J. Swanson in his affidavit. “Many describe pain during the procedure and a variety of effect on their physical and mental health later in life.”

The Trump Department of Justice acted swiftly on the case.

“Female genital mutilation constitutes a particularly brutal form of violence against women and girls. It is also a serious federal felony in the United States,” said Acting United States Attorney Daniel Lemisch. “The practice has no place in modern society and those who perform FGM on minors will be held accountable under federal law.”

According to the affidavit, the clinic operated in strict secrecy and operated on girls from neighboring states.

Nagarwala also admitted she knew the practice was illegal in an interview with the FBI.

If the allegations are true, they highlight how an increasing number of radical Muslims are advocating Islamic laws and other related practices in America even if they are illegal or unconstitutional.

Sharia law in particular is a legal system that is derived from the religious precepts of Islam, and it governs Islamic societies both in public and at home.

It’s one of the primary reasons why critics suggest radical Islam is not just a religion, but an ideology that’s not compatible with Western society and US constitutional law.

Sharia law advocates often harp the “supremacy” of Islamic law over “man-made” Western laws, including the Constitution and the Bill of Rights.

“The invariable and basic rules of Islamic law are only those prescribed in the Shari’ah,” wrote Khirz Khan, who made headlines during the presidential race as a Democratic poster boy opposed to Donald Trump. “All other juridical works… must always be subordinated to the Shari’ah.”