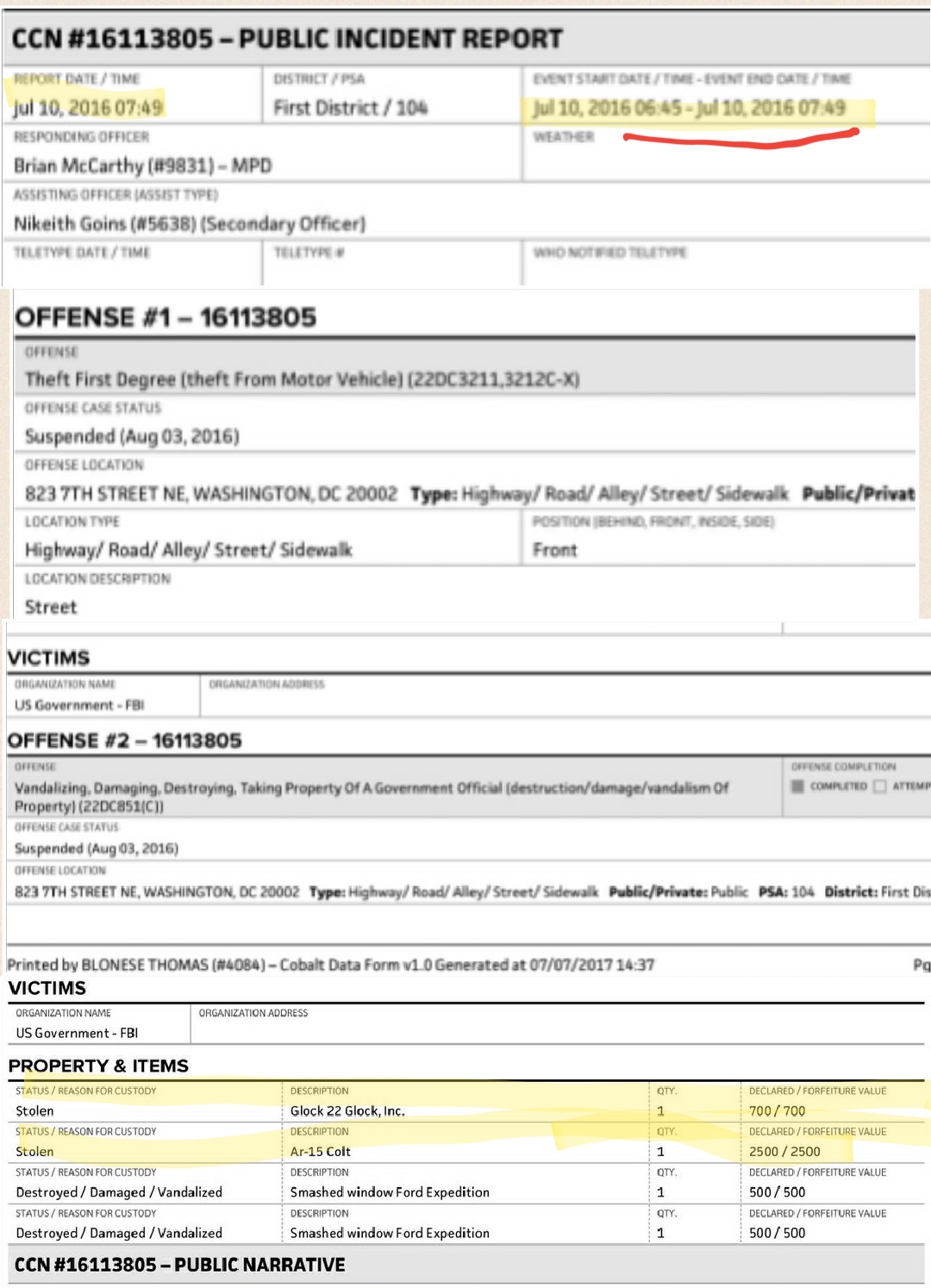 WASHINGTON, D.C. – Infowars.com has obtained a copy of the Washington Metropolitan D.C. Police Department report regarding the FBI vehicle burglarized on July 10, 2016, making it clear the incident was unrelated to the Seth Rich murder case, but also revealing that after WikiLeaks began publishing the DNC emails on July 22, the FBI changed the time of the vehicle break-in and weapons theft to a time before Seth Rich was killed on July 10, so as to link the two events and suggest his killers were the burglars who stole the FBI weapons from the car.

The FBI altered the facts of the July 10 vehicle break-in and weapons theft evidently to deflect attention from Seth Rich as the individual who may have leaked to WikiLeaks DNC emails Rich may have stolen by suggesting his death was a random act of violence, not a political murder designed to silence him and/or to prevent him from leaking additional documents he may have stolen from DNC computers.

Perhaps most importantly, the report establishes that in reporting the incident, FBI agent Matthew Laird stated had parked his car outside 823 7th Street NE, on July 10, 2016, for approximately one hour, starting at 6:45 a.m. ET, until 7:49 a.m. ET, at which time the window of the Ford Expedition was smashed, and two weapons were stolen – a Glock 22 handgun and a AR-15 Colt assault rifle.  The report was filed at 7:50 a.m., indicating Agent Laird had claimed the break-in occurred one minute before he reported the incident.

This would place the time of the robbery of the two weapons from the FBI car as occurring after Seth Rich was murdered, at 4:19 a.m. ET on the morning of July 10, 2016.

The newspaper record makes clear the Seth Rich killing and the theft of the weapons from the FBI vehicle were initially reported as separate, unconnected events, even though both events occurred in close vicinity in Washington, D.C., during the early morning hours of July 10, 2016.

On July 11, 2016, the Washington Post reported Katherine Zackel, a spokesperson for the FBI’s Washington field office, told the press “a handgun and a long gun” were stolen from an FBI Ford Expedition, along with the lock box in which both weapons were secured.

“During that hour it was parked in the 800 block of 7th Street NE,” the Washington Post continued.

“At some point, someone smashed the vehicle’s rear passenger window and took the box, which held the Glock and Colt guns,” the Washington Post commented.

Finally, at 11:36a.m., on July 22, 2016, 3 hours after WikiLeaks posted the “Ready for Hillary” tweet, and about 45 minutes after WikiLeaks published the first of the DNC emails, the FBI put out $10,000 reward for the stolen weapons incident, changing the time the FBI break-in occurred to between Midnight and 2:00 a.m. on July 10, 2016, with no explanation of why the time was changed from the initial FBI report.

On July 22, 2016, the Washington Post reported the FBI was offering a $10,000 reward to help retrieve the handgun and assault-style weapon stolen on July 10 from an FBI agency vehicle parked along the H Street corridor in Northeast Washington.

The story published by the Washington Post on July 22, 2016, went with the new time: “The (FBI) agent reported the missing items to police at about 7:50 a.m.; the FBI think the break-in occurred between midnight and 2 a.m.”

This changed story immediately led to speculation that the assailants who murdered Seth Rich may have obtained their weapons by breaking into the FBI vehicle parked in an area near the neighborhood where Seth Rich was shot and killed.

In a second story, also published by the Washington Post on July 22, 2016, the newspaper reported the following: “Authorities said that the vehicle – a Ford Expedition – was locked and that someone smashed a rear window and took a secured gun lock box. The agent reported the missing items to police about 7:50 a.m.’ the FBI said they think the break-n occurred between 12 a.m. and 2 a.m.”

The second Washington Post story reporting that day on the $10,000 FBI reward also expanded the additional items taken in the theft of the FBI vehicle as follows:

“The missing items include a Rock River Arms LAR-15 rifle, similar to an AR-15; a Glock-22 handgun; a holster, a collapsible baton; pepper spray; two boxes of .40 caliber ammunition; protective head and eye gear; and a black Truck Vault gun box. Also in the car was a Motorola radio. The FBI says that after the theft, the channels were descrambled, rendering the radio useless.”

The Washington Metropolitan D.C. Police Department has refused to make public the police report or the death certificate in the Seth Rich shooting, making it impossible to determine the official record regarding the exact number shots or the caliber of the bullets that caused Seth Rich’s death.

The copy of the Washington Metropolitan D.C. Police Report obtained by Infowars.com makes no mention of anything being stolen from the FBI vehicle other than the Glock handgun and the AR-15 rifle, and says nothing about the vehicle having been parked at the location of the theft near midnight, nor of the theft occurring as early as 2:00 a.m.

Infowars.com was not able to obtain who changed the narrative to suggest the FBI vehicle theft occurred before the Seth Rich murder, or why, but the impact of the change was to make the Seth Rich murder appear more impulsive – as if thieves happened upon an FBI car and stole weapons that they used a few hours later when they encountered a lone, college-aged young man walking along the street a couple of hours before dawn.

The Washington Metropolitan D.C. Police Department report obtained by Infowars.com also indicates the FBI vehicle burglary case was closed on August 3, 2016 – less than 2 weeks after the FBI offered a $10,000 reward for information to help retrieve the handgun and assault-style weapon stolen on July 10 from an FBI agency vehicle.

Why was the FBI vehicle burglary case closed so soon, even though no suspects had been identified in the case?

The Washington Metropolitan D.C. Police Department report obtained by Infowars.com lists the two individuals who reported the vehicle break-in and weapons theft as the FBI agent responsible for the vehicle, Matthew Steele Laird, and Anne Marie Melecha, who lived at 828 7th Street NE in Washington, a few doors away from the location where the FBI vehicle had been parked, at 823 7th Street NE.

The police report does not specify if Laird was seeing Melecha while his vehicle was parked, as the report says nothing about why Laird was there in the early morning hours of July 10, 2016.

It is not clear from the Washington Metropolitan D.C. Police Department report whether Laird and Melecha had any relationship, or that Dezenhall as a crisis-management firm was involved.

It is not clear that Anne Marie Melecha had any connection to the FBI vehicle break-in and weapons theft other than to be the woman who reported the vehicle break-in incident along with FBI Agent Laird at 7:49 a.m. on July 10, 2016.