The case of Harlem Suarez, 23, of Key West reveals the purported threat of ISIS and its supposed cadre of lone wolves inspired by social media is not only drastically overblown, but largely created by the government.

On Tuesday federal officials said Suarez was arrested for planning to set off a backpack bomb at a beach in Florida and claim he was inspired by ISIS.

The entire case was manufactured by the FBI.

The agency gave Suarez a dummy bomb after he made remarks on Facebook about ISIS. Court documents say he had attempted to recruit people to join the terrorist group and commit violent acts.

A “source cooperating with the FBI” was then sent to help Suarez make a video urging “Muslim brothers to buy AK’s, knives and machetes and fight,” according to NBC News.

According to the government, Suarez also tried to buy an AK-47 online, although the weapon was not delivered.

The FBI admits Suarez had no idea how to build a bomb or how to obtain explosives and paid one of the informants $100 to build it for him. Suarez bought a box of nails for the dud bomb delivered by FBI informants.

Infowars has documented numerous cases of witless patsies and even people suffering from mental illness entrapped in terror plots concocted by the FBI.

A report by Mother Jones and the Investigative Reporting Program at the University of California-Berkley released in 2011 revealed that it is now common practice for the FBI to create terror plots.

“The report reveals that the FBI regularly infiltrates communities where they suspect terrorist-minded individuals to be engaging with others. Regardless of their intentions, agents are sent in to converse within the community, find suspects that could potentially carry out ‘lone wolf’ attacks and then, more or less, encourage them to do so. By providing weaponry, funds and a plan, FBI-directed agents will encourage otherwise-unwilling participants to plot out terrorist attacks, only to bust them before any events fully materialize,” RT reported in August 2011.

The New York Times also reported how the FBI plays a major role in creating and then foiling plots with the assistance of patsies. The plots are then used by the government to claim domestic terrorism is a national security threat and the FBI is protecting the American people. 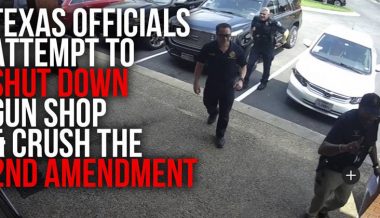 Watch Live: America Fighting for Its Freedom in Midst of Coronavirus Outbreak