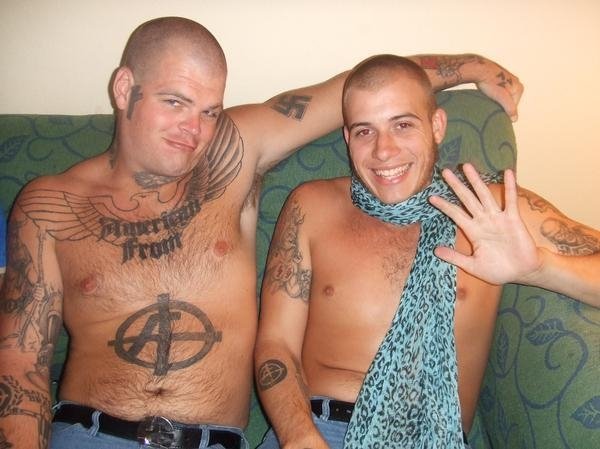 The new face of terrorism in the United States.

If the case of white supremacist Hal Turner taught us anything, it is that the government manufactures Nazis and racists from whole cloth and then uses them to push hysterical domestic terrorist propaganda and self-aggrandizement.

It came out during Turner’s trial that he was a “National Security Intelligence” asset working for the FBI’s Joint Terrorism Task Force. His code name was “Valhalla” and “he received thousands of dollars from the FBI to report on such groups as the Aryan Nations and the white supremacist National Alliance, and even a member of the Blue Eyed Devils skinhead punk band,” according to The Record.

The FBI has run racist and white supremacist groups since the 1960s. Under COINTELPRO, the FBI “subsidized, armed, directed and protected the Ku Klux Klan and other right-wing groups,” Brian Glick writes. Racist groups were used to create a strategy of tension by attacking groups on the so-called left, including anti-war, Chicano and Puerto Rican activists and nationalists.

More recently, in 2007, the FBI organized a neo-Nazi march in Orlando, Florida. The FBI’s “informant” (agent provocateur) “was one of the most visible individuals in the National Socialist Movement,” according to Andy Rosenkranz, state regional director for the Anti-Defamation League. “Generally, the FBI and the JTTF (Joint Terrorism Task Force) in Florida does an excellent job.”

The FBI has also infiltrated a number of supposed Muslim terrorists groups and has wheedled, cajoled and otherwise manipulated patsies into agreeing to commit terror attacks.

In October, Mother Jones revealed that the FBI is notorious for creating supposed terrorist groups from scratch and then framing patsies in order to claim the government is protecting the United States from terrorists. The number of government informants and agents provocateurs has grown exponentially since the 1970s when the FBI claimed it shut down COINTELPRO.

“One member offered a $1,000 reward for the shooting of a black man. Others stockpiled explosives to be used in terror attacks on U.S. targets,” writes Bartkewicz. “But the biker gang was founded by undercover law enforcement agents in Florida, and eventually 20 people were arrested for a range of offenses, from dealing drugs to possessing illegal weapons and plotting murders, the Orlando Sentinel reported.”

In May, the FBI took down a group of mentally challenged white supremacists belonging to the American Front, a group on the edge of extinction in the early 2000s but resuscitated on the internet. The FBI claimed the group was “planning to kill Jews and minorities in the ‘inevitable’ race war, according to an affidavit obtained by the Orlando Sentinel. The Sentinel reports that the group also looked to manufacture ricin, a ‘weapon of mass destruction,’” CBS Tampa reported.

Fear and loathing by liberals over FBI manufactured racist threat.

Considering the FBI’s track record, however, it is likely the ricin plot was concocted by the agency and then fed to the American Front patsies prior to the sensationalized bust. Patsies rarely devise their own plots and are carefully managed by the agency and its army of informants and agents provocateurs.

The Nazi biker group created by the FBI after the Aryan Nations said it wanted to form a Nazi motorcycle club to serve as the militant arm for white supremacists across the country, according to records obtained by the Orlando Sentinel.

“Using a false identity, the agent with the Orange County Sheriff’s Office became the Aryan Nations’ top Florida administrator responsible for recruiting members for what would become the 1st SS Kavallerie Brigade Motorcycle Division — operating out of a clubhouse in St. Cloud,” Henry Pierson Curtis writes for the Sentinel.

“Early members included at least two additional undercover FBI agents – who infiltrated the club — and a biker accused of offering $1,000 to anyone willing to shoot a black man riding an ATV in rural Osceola County, records show.”

In 2007, a FBI informant, Rick Spring, admitted to running the Aryan Nations. “In a confessional emailed out to white nationalist leaders, federal informant and convicted bank robber Rick Spring admitted today that he operated the Aryan Nations as a false flag front group for the FBI after the death of Richard Butler,” wrote Bill White, editor of the Libertarian Socialist News.

Government connections to terror groups are legion. In 2004, for instance, the FBI revealed the Southern Poverty Law Center was involved with government operative and convicted Oklahoma City bomber Timothy McVeigh and the Aryan Republican Army at Elohim City. McVeigh’s contact at Elohim City was Andreas Carl Strassmeir, a former German intelligence officer. Peter Langan, the son of a retired U.S. Marine intelligence officer and said to be the leader of the Aryan Republican Army, was a government informant.

The SS Kavallerie Brigade Motorcycle Division, responsible for setting up the American Front, is yet another convoluted government fabrication designed to convince ill-informed Americans that radical Muslims are not the only threat they face. So are white guys with tattoos on their foreheads.

The absurdly overblown threat of skinheads gunning for minorities plays right into the Department of Homeland Security’s “rightwing extremist” narrative.

“Threats from white supremacist and violent antigovernment groups during 2009 have been largely rhetorical and have not indicated plans to carry out violent acts,” the DHS wrote in a 2009 for eyes-only memo subsequently leaked to Infowars.com and others, but “have capitalized on the election of the first African American president, and are focusing their efforts to recruit new members, mobilize existing supporters, and broaden their scope and appeal through propaganda, but they have not yet turned to attack planning.”

The FBI’s contrived plots – including purported violence against police and officialdom by the Hutaree militia and now a supposed weapons of mass destruction attack by the American Front – are designed primarily for propaganda purposes. The Hutaree militia was vindicated in court and the accusations against the American Front will likely also eventually be reduced and revealed as government grandstanding, although this will not be reported on the front page in blazing headlines.