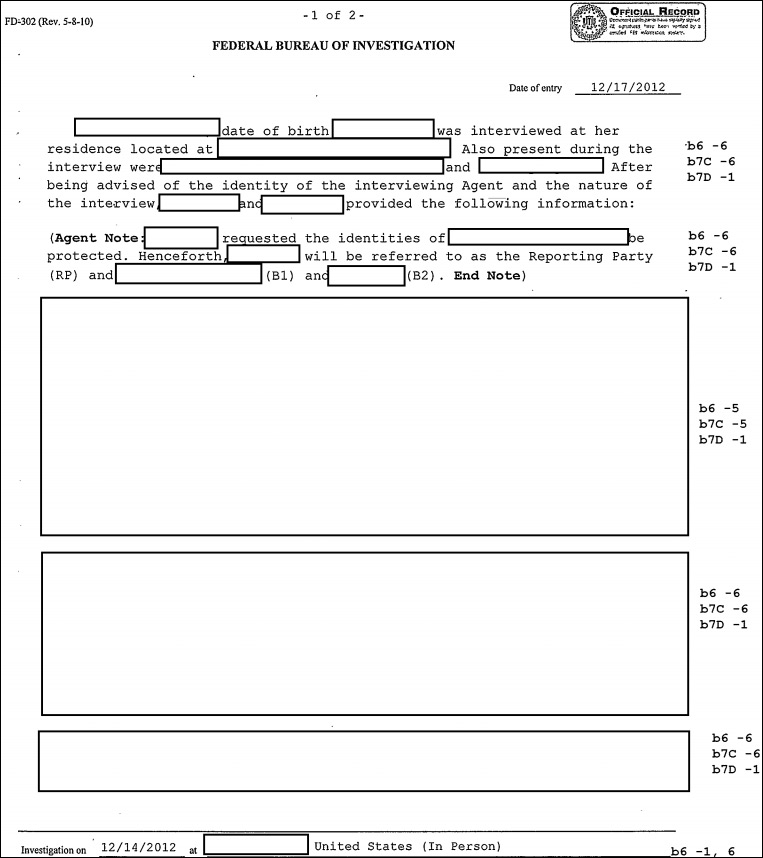 The Federal Bureau of Investigation’s records vault released a trove of documents Tuesday concerning their investigation into the December 14, 2012 shooting at Sandy Hook elementary in Newtown, Conn.

In many cases entire pages are redacted, as others are also pointing out online.

Throughout unredacted portions of the docs, 20-year-old gunman Adam Lanza is described as a loner tech-savvy high school dropout who enjoyed Japanese techno music and Manga, had an interest in weapons and was an experienced shooter.

“Adam was a functioning autistic with a personality disorder and was a recluse,” one unredacted sentence from the agency’s summary reads (pg 6, 1 of 3).

In a section entitled, “Adam’s Physical Health,” the FBI explains Lanza may have had a “kidney/gastrointestinal health condition” and that he underwent kidney and gall bladder tests, had difficulty sleeping and weighed 85 pounds in 2010.

“Adam was diagnosed with Ashberger’s [sic] Syndrome, a form of autism, in approximately the 8th grade. He left high school in either the 9th or 10th grade, and essentially became a ‘recluse,’ shutting himself in his bedroom, playing video games all day,” one anonymous source reportedly told agents.

The documents also highlight the FBI’s investigations of numerous death threats to various businesses and Newtown residents from copycats pretending to be Lanza in the days and months following the incident.

Update: On page 41 (1 of 3), a source revealed federal agents had visited Adam Lanza years ahead of the massacre. The source told agents that Lanza, while in the ninth grade, was visited at his home by either CIA or FBI agents after hacking “a government computer system.”

“The authorities told Nancy [Lanza] that if her son was that smart he could have a job with them someday,” the source said.

Check out the newly-released docs below: