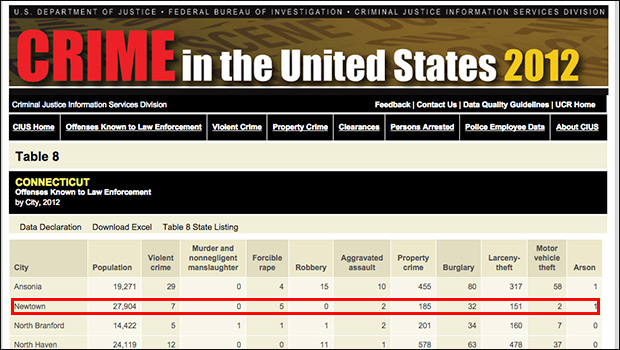 Recently released FBI crime statistics curiously appear to show that no murders occurred in Newtown, Connecticut, in 2012, despite reports that numerous schoolchildren and faculty members were slaughtered during a shooting rampage in December of that year.

On December 14, 2012, the world watched in horror as the corporate media reported the deaths of 20 students and 6 staff members at the Sandy Hook Elementary School in Newtown at the hands of a deranged 20-year-old.

Internet sleuths immediately took to the web to stitch together clues indicating the shooting could be a carefully-scripted false flag event, similar to the 9/11 terror attacks, the central tenet being that the event would be used to galvanize future support for gun control legislation. Two years later, and scores of politicians and gun control groups have cited the Sandy Hook incident as a pretext to curtail Americans’ Second Amendment rights.

The investigation took an odd turn earlier this year when national school safety consultant Wolfgang Halbig was visited and threatened at his home by homicide detectives after he began reporting on additional inconsistencies in the Sandy Hook narrative, which he believes prove the shooting to be fabricated.

Among 16 questions which Halbig says are key to unlocking the Sandy Hook mystery, Halbig asks, “Why and for what reason would the FBI classify the SHES shooting when they did not classify the Columbine shooting which also was an Active Shooter Mass Casualty Incidents (AS/MCI)?”

Additionally, Halbig questioned why no trauma helicopters were ever summoned to the school, and why paramedics and EMTs weren’t allowed to enter the building to try to save lives.

In contrast to the Connecticut report, the 2012 FBI crime report for the state of Colorado shows that 29 murders occurred in the town of Aurora that year, a figure which takes into account the number of people who died in the Century Theater during the premiere of Christopher Nolan’s The Dark Knight film.

While those who question the official Sandy Hook story have largely been marginalized, the FBI’s own data is now seemingly substantiating their theories.

What do you think about the FBI’s latest crime data? Leave your comments below.

Check out Alex Jones’ latest interview (Sept. 25, 2014) with Wolfgang Halbig, covering the latest in his Sandy Hook investigation and the FBI’s crime stats.

Watch Infowars explore why people believe the Sandy Hook shooting to be a hoax.

Check out our various interviews with Wolfgang Halbig below, including one conducted following his visit to the Newtown city hall where he posed his questions directly to city council members.