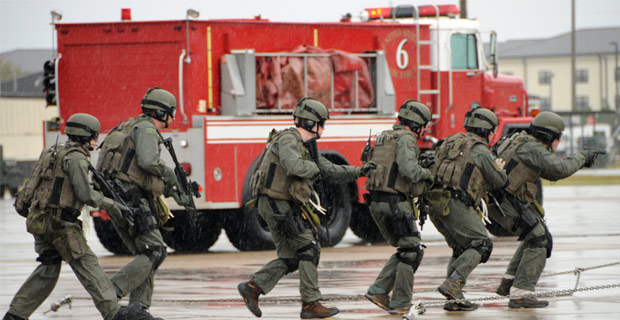 The Aug. 14 National Threat Assessment for Domestic Extremism, which was obtained by the Washington Free Beacon, claims that militia members and sovereign citizens are among those “aspired” to carry out violent attacks, yet it only indirectly mentions Islamic terrorism in a footnote describing “other” types of “domestic extremism” not included in the report.

“Of a sample of 50 credible violent threat intelligence reports analyzed for this assessment, nearly 60 percent expressed lethal violence as an ultimate goal,” the report asserts.

The report reads like a spiritual successor to previous publications by the Southern Poverty Law Center, which routinely demonized Constitutionalists and other libertarians by grouping them with white supremacists and other racist organizations.

And, unfortunately, it should be no surprise the FBI considers freedom-loving Americans a larger threat than violent Islamic extremists when previous actions by the federal government to suppress political dissidents are taken into consideration.

Earlier this month, a university consortium funded by the Department of Homeland Security designated sovereign citizens as the “number one domestic terrorist threat in America,” ranking them above Islamic extremism in agreement with the FBI’s terror assessment.

The University of Maryland’s National Consortium for the Study of Terrorism and Responses to Terrorism (START) said sovereign citizens were the “top concern of law enforcement.”

It recommended that state and federal law enforcement share intelligence on sovereign citizens and other targeted groups, develop “tactical responses” to threats and “act on that information to prevent or mitigate threats.”

Similarly, in 2011, the FBI said it “considers sovereign-citizen extremists as comprising a domestic terrorist movement.”

But, as journalist Kurt Nimmo pointed out, sovereign citizens do not actually constitute a cohesive movement despite the government’s attempts to characterize them as such.

“The START report also neglects to mention that virtually all high-profile domestic terrorism plots in the United States after 9/11 were directed by the FBI and the U.S. government, a fact reported by The New York Times,” he wrote.

Additionally, in 2009 the Missouri Information Analysis Center (MIAC) distributed a law enforcement bulletin entitled The Modern Militia Movement which instructed police to be on the lookout for Americans displaying “political paraphernalia” such as Gadsden flags and Ron Paul bumper stickers.

MIAC, a federal law enforcement information sharing hub more commonly known as a fusion center, described itself as a “mechanism to collect incident reports of suspicious activities” in order to “identify potential trends or patterns of terrorist or criminal operations within the state of Missouri.”

Similarly, and perhaps even more eerily, during the 2008 presidential election Obama’s campaign team asked Missouri law enforcement to “target anyone who lies or runs a misleading television ad,” as Russell Kinsaul with News 4 reported: