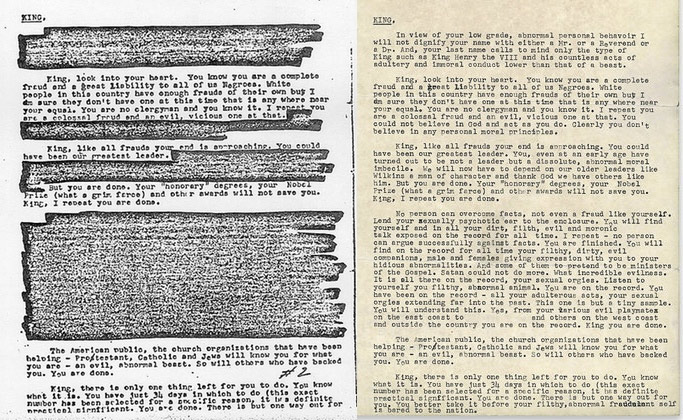 The New York Times has published an unredacted version of the famous “suicide letter” from the FBI to Dr. Martin Luther King, Jr. The letter, recently discovered by historian and professor Beverly Gage, is a disturbing document. But it’s also something that everyone in the United States should read, because it demonstrates exactly what lengths the intelligence community is willing to go to—and what happens when they take the fruits of the surveillance they’ve done and unleash it on a target.

The anonymous letter was the result of the FBI’s comprehensive surveillance and harassment strategy against Dr. King, which included bugging his hotel rooms, photographic surveillance, and physical observation of King’s movements by FBI agents. The agency also attempted to break up his marriage by sending selectively edited “personal moments he shared with friends and women” to his wife.

Portions of the letter had been previously redacted. One of these portions contains a claim that the letter was written by another African-American: “King, look into your heart. You know you are a complete fraud and a great liability to all us Negroes.” It goes on to say “We will now have to depend on our older leaders like Wilkins, a man of character and thank God we have others like him. But you are done.” This line is key, because part of the FBI’s strategy was to try to fracture movements and pit leaders against one another.

The entire letter could have been taken from a page of GCHQ’s Joint Threat Research and Intelligence Group (JTRIG)—though perhaps as an email or series of tweets. The British spying agency GCHQ is one of the NSA’s closest partners. The mission of JTRIG, a unit within GCHQ, is to “destroy, deny, degrade [and] disrupt enemies by discrediting them.” And there’s little reason to believe the NSA and FBI aren’t using such tactics.

The newly unredacted portions shed light on the government’s sordid scheme to harass and discredit Dr. King. One paragraph states:

No person can overcome the facts, no even a fraud like yourself. Lend your sexually psychotic ear to the enclosure. You will find yourself and in all your dirt, filth, evil and moronic talk exposed on the record for all time. . . . Listen to yourself, you filthy, abnormal animal. You are on the record.

And of course, the letter ends with an ominous threat:

King, there is only one thing left for you to do. You know what it is. You have just 34 days in which to do it (this exact number has been selected for a specific reason, it has definite practical significance). You are done. There is but one way out for you. You better take it before your filthy, abnormal fraudulent self is bared to the nation.

There’s a lesson to learn here: history must play a central role in the debate around spying today. As Professor Gage states:

Should intelligence agencies be able to sweep our email, read our texts, track our phone calls, locate us by GPS? Much of the conversation swirls around the possibility that agencies like the N.S.A. or the F.B.I. will use such information not to serve national security but to carry out personal and political vendettas. King’s experience reminds us that these are far from idle fears, conjured in the fevered minds of civil libertarians. They are based in the hard facts of history.