An art gallery in Portland is being blasted online for prominently displaying an image of President Donald Trump being decapitated.

As part of their “Fuck you Mr. President” exhibit held on July 13, One Grand Gallery showed art from leftists still suffering Trump derangement syndrome more than 18 months after his inauguration.

A June 4 call to artists for the exhibit is exemplary of the gallery’s hatred for the sitting US president.

“How far we’ve come since our Bernie Sanders show from the fall of 2016,” the post reads.

“[Trump’s] election has brought out the worst in American citizens, exacerbating political divides, and we have been devastated watching the unfortunate turn of events since his inauguration,” the now-deleted post read.

“We hate the president and want to let him know,” reads another call to artists.

State of Affairs: a collection. Via @stefanways , @robert_william_moreland , @theacademynewyork , and @streetartglobe. Ps: only a few more days to submit art for the OGG “FUCK YOU MR. PRESIDENT” show. Deadline is June 22, email [email protected], and be on the lookout for the show in July. 🇺🇸🇺🇸🇺🇸

On Tuesday, hundreds of Trump supporting commenters inundated the gallery’s Facebook page with pro-Trump memes and statements, while some claimed they were referring the art to the Secret Service. 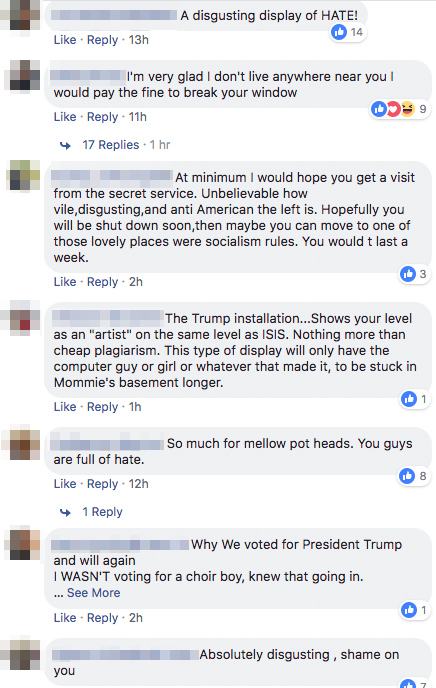 The unhinged artwork is the latest instance of the Left’s violent fantasy of chopping off Trump’s head.

In the past, Mexican-American metal band Brujeria had a shirt pulled from the Walmart website due to its obscene image featuring the president’s bloody severed head.

And who can forget CNN contributor Kathy Griffin’s off-the-wall 2017 photo shoot in which she held a bloody, decapitated head made in the likeness of US President Donald Trump.

The gallery did not respond to Infowars’ requests for comment at time of publication.

The exhibit will be on display through August 10th.