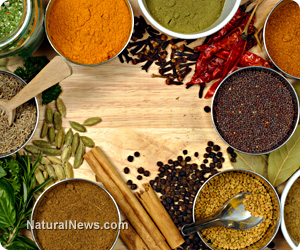 Hiding inside your pepper grinder and cumin shaker could be things like rodent hairs, bug parts and even salmonella, claims a new report recently put out by the U.S. Food and Drug Administration (FDA). Entitled “Pathogens and Filth in Spices,” the report alleges that up to 12 percent of all U.S. spice imports may contain hidden insect filth, while up to 7 percent may contain bacterial contaminants, an obvious push by the agency to further legitimize irradiating cooking spices.

According to CNN, the agency decided to launch an investigation into the contents of imported cooking spices as part of a general assessment of their safety risks. The agency itself says the endeavor was hatched in response to growing concerns about the effectiveness of current safety control measures for spices. But based on the findings of the report, spices are generally safe and pose a minimal risk to human health.

Nevertheless, the FDA is convinced that spices may be dangerous, categorizing them as a “systemic challenge” due to the fact that they generally contain about twice as much “filth” as other kinds of imported food. And yet, based on 37 years’ worth of records looked at by the agency, there have only been 14 outbreaks ever in the entire world that have been linked to spices or seasonings, resulting in fewer than 2,000 human illnesses and 128 hospitalizations.

“We would agree ready-to-eat spices should be clean and meet FDA standards and be pathogen-free,” stated Cheryl Deem, Executive Director of the American Spice Trade Association, to CNN about the findings. “We did find it really interesting that the FDA said they were going to use this report to develop a plan to reduce illness, but if you look at the data we don’t think that’s a significant problem. That’s a small number of illnesses.”

Despite its thorough analysis on imported spices, the FDA apparently failed to distinguish in test results whether or not the spices it looked at were in “ready-to-eat” form or in raw form. Ready-to-eat spices have already been cleaned overseas prior to import, while raw spices may still need to processed. It is typically raw spices from non-organic sources that contain the most “filth,” a fact that the FDA should have addressed in its report.

It may seem curious that the FDA appears to have made a mountain out of a molehill concerning spice safety, that is until you consider the fact that the FDA has been trying to amass more control over the food supply for years. Even in its new report, the FDA admits that the agency’s goal is to utilize more of the provisions outlined in the Food Safety Modernization Act, the infamous regulatory overhaul that harmonizes American law with the international Codex Alimentarius food code.

“This is an example of non-experts trying to start a commotion with consumers,” writes one CNN commenter who claims to have previously worked in the spice industry. “The field insects are mostly of the garden variety and harmless coming from the field where crops are grown…. Welcome to your world people insects are everywhere.”

You can read the full, 213-page FDA report on spice safety here:
http://www.fda.gov.