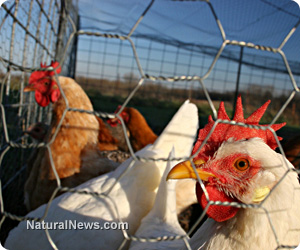 America’s small farmers are once again under attack, this time by a new draft guidance issued by the U.S. Food and Drug Administration (FDA) that threatens to eliminate truly free-range and pastured poultry and eggs. Entitled “Questions and Answers Regarding the Final Rule, Prevention of Salmonella Enteritidis in Shell Eggs During Production, Storage, and Transportation,” the new agency report basically suggests that all egg producers with 3,000 or more laying hens be forced to raise their birds indoors to avoid bacterial contamination, which would eliminate consumer access to chicken and eggs from birds raised naturally outdoors on pasture.

In response to a slew of illness outbreaks that have occurred in recent years, the FDA has once again sidestepped the real problem, factory chicken farms, and instead focused its attention on small-scale producers, which generally are the only farms producing truly safe and healthy eggs. Even though large-scale factory chicken farms are the ones brimming with harmful bacteria, which is a direct result of birds being crammed into tiny cages and left to wallow in their own feces and filth, the FDA is going after family-scale egg producers that allow their birds to roam around in natural sunlight and peck at worms and insects in pasture grasses.

According to the FDA’s recommendation for a final ruling on “safe” hen rearing, all farmers with 3,000 or more birds will need to essentially convert their outdoor areas into indoor areas by surrounding their fields with tall fencing and covering the tops with mesh or solid roofing in order to prevent wild birds, rodents, and other creatures from entering the space. Having open, outdoor spaces for laying hens, according to the FDA, is now considered to be dangerous and a threat to public health, so it will have to be eliminated.

Never mind the fact that pasturing poultry has always been the safest way to produce food from chickens — the FDA wants all birds to be confined indoors in so-called “sanitary” spaces where they will allegedly be protected from all the soil, grass and other natural elements on which chickens have always lived. Only man-made structures that completely insulate birds from the outside world are considered appropriate for laying hens in the eyes of the FDA.

“The FDA guidance suggests that farmers must cover their outdoor pastures with either roofing or netting, or use noise cannons to scare away wild birds,” explains The Alliance for Natural Health USA (ANH-USA). “FDA also advocates walls around the pasture, to prevent mice, rats, and cats from entering, and then put a roof over it. That’s right — walls and roofing. In other words, they want the chickens to be kept in a building!. This completely contradicts what ‘free-range’ is supposed to be about: they can be cage-free, but not outdoors.”

You can read the complete FDA guidance here:
http://www.fda.gov

Tell the FDA to go after filthy industrial producers, not free-range producers

The good news, however, is that this new FDA guidance is only a draft, which means the agency is still receiving public comments on the issue. This means that, as an advocate of natural health, you have the opportunity to help guide the process along and ensure that pasture-based egg and poultry producers are not unfairly targeted and forced to convert their methods to unscientific ones that have been concocted to reflect the interests of factory producers.

You can urge the FDA to reevaluate its position on pastured poultry and instead go after the factory-scale producers responsible for nearly all disease outbreaks by submitting a comment through the Federal Register. The FDA will accept public comments on this issue until September 23, 2013:
http://www.regulations.gov

You can also take action through this ANH-USA comment submission portal:
http://www.regulations.gov