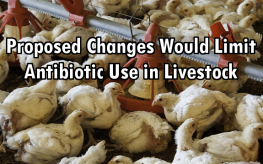 The Food and Drug Administration announced a voluntary program in December of 2013 that would hopefully reduce the amount of antibiotics used in animals raised for food. The program depends entirely on the industry to decide for itself if it wants to adhere or not, but a few big pharmaceutical companies have already signed on.

According to OPB.org, both Elanco and Zoetis signaled they would adhere to the new standards—created in an effort to ultimately reduce the proliferation of antibiotic-resistant illnesses in humans.

The FDA regulation limits the use of antibiotics like penicillin and tetracycline (those with human drug counterparts) for only the treatment and prevention of disease. The medications will no longer contain verbiage alluding to their ability to increase growth, a major reason for their overuse. If a farmer is caught using the antibiotics to make their animals bigger, they could face criminal charges.

It’s no surprise that today’s food animals receive far beyond what’s necessary in antibiotics, they aren’t only used to fight illness among herds, for example, but in an effort to create larger animals in a shorter amount of time. After all, in today’s agricultural climate, it’s all about the money.

While the FDA’s new program may be a step in the right direction, it isn’t enough.

Firstly, the program is voluntary. Pharmaceutical manufacturers don’t have to comply if they don’t want to, and if a bottle of antibiotics states that it can be used to promote growth, farmers are absolutely entitled to use it as such.

Secondly, even if these veterinary pharmaceutical companies do comply, there are definite ways around the program. At lower doses, farmers can continue to use the drugs and simply say they are for disease prevention.

Another aspect of the new program is that these antibiotics will now require a veterinary prescription. In the past, many were available over the counter at farm supply stores. While the idea is novel and could be a boon to large animal veterinarians, these doctors often have a very close relationship with the farmers they work for. In other words, they may not “police” the new policy as the FDA seems to think they will.

Anything that keeps the dialogue going about antibiotic use in meat production is positive. The more noise we make about it, the more likely that significant changes will be made.

But if the FDA thinks this will be “good enough” and if pharmaceutical companies think their compliance with a weak and voluntary recommendation will quell the criticism, they are sorely mistaken.