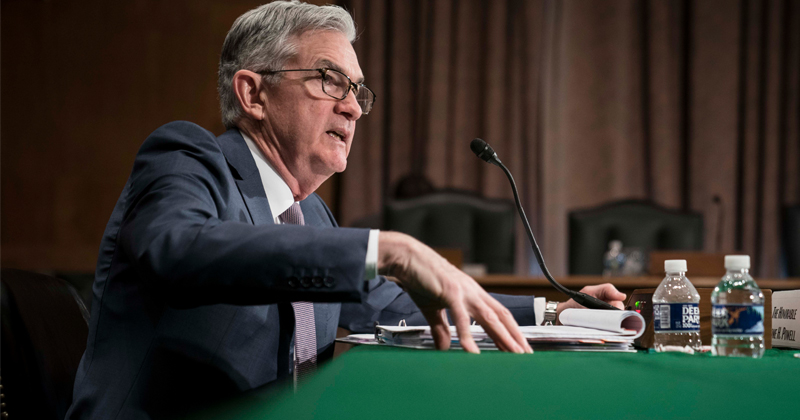 Every once in a while, the truth slips out of Federal Reserve Chairman Jerome Powell’s mouth.

Powell was on Capitol Hill this week addressing Congress. He continued to talk up the economy, but in a moment of honesty, tacitly admitted that the central bank is already engaged in extraordinary monetary policy, and confessed the Fed may not have the firepower to fight the next recession. During testimony before the House Financial Services Committee, the Fed chair conceded that the current low level of interest rates “means that it would be important for fiscal policy to support the economy if it weakens.”

As Bloomberg put it, this is an “unusual appeal by the head of a politically independent institution that is used to combating economic contractions on its own.”

One has to wonder how Powell expects Uncle Sam to step up and help when he is already engaging in some pretty extraordinary policy himself. The federal budget deficit will almost certainly eclipse $1 trillion in fiscal 2020. That’s only happened four times in history – all in the aftermath of the 2008 financial crisis. In other words, the federal government is already doing recession-like stimulus. How will it do more to support the economy if it weakens?

And that will mean more Federal Reserve debt monetization.

And by the way, Powell admitted this was on the horizon as well. During testimony before the Fed Senate Banking Committee, Powell said the central bank has two primary tools to fight a recession. The Fed can buy government bonds, otherwise known as quantitative easing, and it can use interest rate policy, or “forward guidance,” as Powell called it.

“We will use those tools — I believe we will use them aggressively should the need arise to do so.”

“We will have less room to cut,” Powell said, in what sounds a little like an understatement.

In fact, the Fed has already been cutting. The central banks slashed rates three times last year. And we’re not even in a recession.

Powell dismissed a suggestion that the central bank might consider directly funding the government. “That’s really an untested and not widely supported perspective,” he said.

But the ugly truth is quantitative easing is nothing but a roundabout way of funding the government. As CFA Daniel Amerman put it:

“The Federal Reserve is doing what no responsible central bank is supposed to do, and effectively funding the growth in the debt at well below free-market interest rates via monetary creation on a massive scale—without admitting that it is doing so … This is all about funding the fast-growing national debt at lower rates than what rational investors would accept in a free market, and the repo crisis was a symptom of that problem, not the cause.”

Powell faced a number of questions about the issues in the repo markets. The central bank has been injecting billions of liquidity into these overnight markets for months, and there is some indication that repo operations will never end completely. Members of Congress kept referring to the issues in the repo markets as a “glitch.” As Peter Schiff explained in his most recent podcast, it wasn’t a glitch — it was the market.

“What happened in that repo market is that interest rates shot up because there’s so much borrowing and there’s not enough savings to counteract it, offset it, and so, rates were moving up, which is what they should do. Rates are too low. They should be much higher. And so, it wasn’t a glitch, it was the market. And what the Fed did was intervene to hold those market forces at bay because if interest rates were allowed to rise, then the debt would be a huge problem right now, because now we would be stuck with a massive bill on all this debt and we can’t pay it. So, in order to prevent that from happening, that’s why the Fed came back to the repo market with all this QE. It was to artificially suppress rates again and to keep those market forces at bay a while longer.”

(In this podcast, Peter also talks about the most recent jobs report, presidential politics, the minimum wage, and bitcoin.)

The bottom line is that while Powell continues to slap lipstick on the pig that is the US economy, he knows there are significant problems lurking just under the surface. And every once in a while the truth slips out.