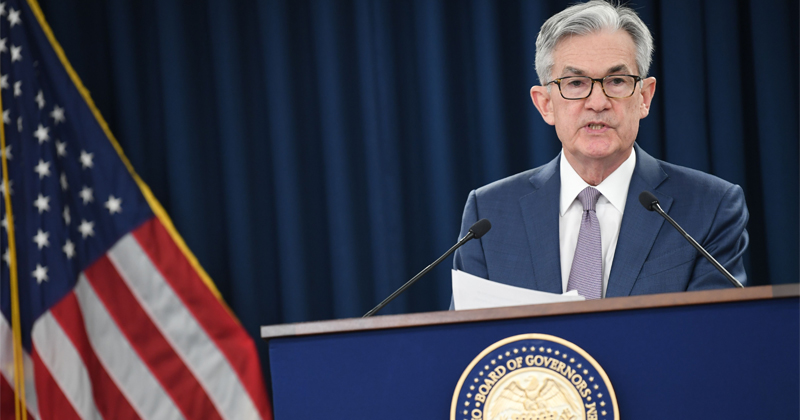 Despite the better than expected employment report last week and constant chatter about a quick economic recovery, the Federal Reserve has no intention of rolling back what Peter Schiff called its “monetary Hail Mary.”

The Fed wrapped up its June Federal Open Market Committee (FOMC) meeting on Wednesday, holding interest rates steady at 0-.25%. Nobody expected the central bank to make any significant policy moves. The real questions revolved around what kind of forward policy guidance the Fed would provide. That turned out decidedly doveish.

During his press conference after the meeting, Federal Reserve Chairman Jerome Powell committed to “do whatever we can, for as long as it takes.”

In its official statement, the Fed assured markets that it remains ready and committed “to use its full range of tools” to support the US economy. The central bank indicated it has no intention of raising interest rates until at least 2022.

Peter called this “perhaps the most dovish statement I’ve ever heard a Fed chairman make.”

“To support the flow of credit to households and businesses, over coming months the Federal Reserve will increase its holdings of Treasury securities and agency residential and commercial mortgage-backed securities at least at the current pace to sustain smooth market functioning, thereby fostering effective transmission of monetary policy to broader financial conditions. In addition, the Open Market Desk will continue to offer large-scale overnight and term repurchase agreement operations.”

There has been much anticipation of a quick recovery as governments ease restrictions and open up state economies, but Powell threw cold water on that notion saying, “it is a long road. It is going to take some time.”

Peter said the Fed’s official statements and Powell’s comments after the meeting show him that what the Fed is doing now “really amounts to nothing but a monetary Hail Mary.”

“The Fed is desperate. They know that everything is going to fall apart. So, they just got interest rates at zero and they don’t care what happens. It’s like they got their pedal to the metal, and they’re going full-speed ahead, and they just closed their eyes. They don’t even care what’s on the road because it doesn’t matter. Even if they go over a cliff and crash and burn, it doesn’t matter because they’re going to die anyway. I mean, that’s basically what they’re saying.”

Gold rallied on the Fed statement and Powell’s comments, pushing up to around $1,739 per ounce. But Peter said if people really understood Powell’s statement, gold would be even higher.

Peter characterized Powell’s statement as incompetent and arrogant” saying that the central bank should be looking at scenarios that might require an earlier than expected rate hike.

“Like they’re actually watching the data and they’re going to see what happens. And maybe we eased too much. So, what are the signs that we need to look for that says we have to dial this back, that we have to withdraw this liquidity, that we added too much, that we’ve got to raise rates or we’ve got to start shrinking our balance sheet? But they’re not thinking about those things at all. And I think because they realize that if they thought about it, they’d realize that we’re screwed. They’d realize that there’s no way they could raise interest rates. It’s impossible without crashing the economy. So, since there’s no way they can do it, they’re not even going to think about thinking about it.”

In reality, raising rates would do so much damage to the economy, the central bankers at the Fed aren’t even going to think about thinking about it.