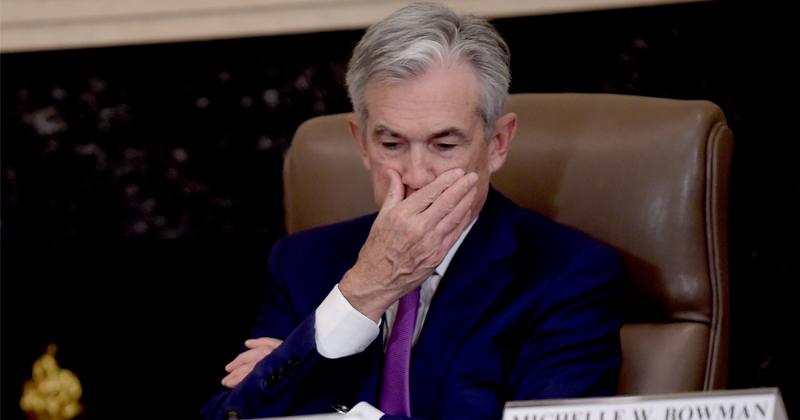 President Trump recently took aim at the Federal Reserve once again, accusing the central bank of “holding back” America’s economy.

The president was responding to a FOX Business Varney & Co. segment about negative interest rates in Europe and Japan.

Trump said the Fed should follow the lead of European and Japanese central banks into the world of negative rates.

“Over in Europe and Japan they have NEGATIVE RATES. They get paid to borrow money. Don’t we have to follow our competitors?” @Varneyco Yes we do. The Fed doesn’t have a clue! We have unlimited potential, only held back by the Federal Reserve. But we are winning anyway!

Last week, Trump said the Fed was “derelict in its duties” because it hadn’t taken rates low enough.

But are negative rates really the medicine that will cure America’s economic woes? (It gets a little confusing here because according to Trump, this is the greatest economy ever, so it’s a little unclear why we need extraordinary monetary policy right now. But we’ll just roll with it.)

In a recent podcast, Peter Schiff said the Fed has indeed been derelict in its duties, but for the exact opposite reason that Trump claims.

“Where the Fed has been derelict is in keeping interest rates too low. They’ve been providing too much of this so-called stimulus to the economy. That’s where they’ve been derelict. They have not been the provider of sound money. They have not provided the fiscal discipline that we want an independent central bank to provide. The whole idea of the independence of the central bank is to prevent the central bank from working with the government to expand the size of government and to expand debt. But that’s what they’ve been doing. And that’s what Donald Trump wants the Fed to do.”

“Calculation Error,” which Bloomberg terminals sometimes display1, is an apt metaphor for the current state of central bank policy. Both Europe and Asia are now awash in $13 trillion worth of negative-yielding sovereign and corporate bonds, and Alan Greenspan suggests negative interest rates soon will arrive in the US. Despite claims by both Mr. Trump and Fed Chair Jerome Powell concerning the health of the American economy, the Fed’s Open Market Committee moved closer to negative territory today — with another quarter-point cut in the Fed Funds rate, below even a measly 2%.

Negative interest rates are just the latest front in the post-2008 era of “extraordinary” monetary policy. They represent a Hail Mary pass from central bankers to stimulate more borrowing and more debt, though there is far more global debt today than in 2007. Stimulus is the assumed goal of all economic policy, both fiscal and monetary. Demand-side stimulus is the mania bequeathed to us by Keynes, or more accurately by his followers. It is the absurd idea, that an economy prospers by consuming and borrowing instead of producing and saving. Negative interest rates turn everything we know about economics upside down.

Under what scenario would anyone lend $1,000 to receive $900 in return at some point in the future? Only when the alternative is to receive $800 back instead, due to the predicted interventions of central banks and governments. Only then would locking in a set rate of capital loss make sense. By “capital loss” I mean just that; when there is no positive interest paid, the principal itself must be consumed. There is no “market” for negative rates. The future is uncertain, and there is always counterparty risk. The borrower might abscond, or default, or declare bankruptcy. Market conditions might change during the course of the loan, driving interest rates higher to the lender’s detriment. Inflation could rise higher and faster than the agreed-upon nominal interest rate. The lender might even die prior to repayment.

Positive interest rates compensate lenders for all of this risk and uncertainty. Interest, like all economics, ultimately can be explained by human nature and human action.

If in fact, negative interest rates can occur naturally, without central bank or state interventions, then economics textbooks need to be revised on the quick. Every theory of interest contemplates positive interest paid on borrowed capital. Classical economists and their “Real” theory say interest represents a “return” on capital, not a penalty. Capital available for lending, like any other good, is subject to real forces of supply and demand. But nobody would “sell” their capital by giving the buyer interest payments as well, they would simply hold onto it and avoid the risk of lending.

Marxists think interest payments represent exploitation by capital owners lending to needful workers. The amount of interest paid in addition to the capital returned was stolen from the debtor, because the lender did not work for it (ignoring, of course, the capitalist lender’s risk). But how could a borrower be exploited by receiving interest payments for borrowing, i.e., repaying less than they borrowed? I suppose Marxists may in fact cheer the development of negative rates, and perversely see them as a transfer of wealth from lenders to borrowers (when, in fact, we know cheap money and credit overwhelmingly benefit wealthy elites, per the Cantillon Effect). So negative rates require Marxists to drastically rethink their theory of interest.

It should be noted that rational purchasers of negative-yield bonds hope to sell them before maturity, i.e., they hope bond prices rise as interest rates drop even lower. They hope to sell their bonds to a greater fool and generate a capital gain. They are not “buying” the obligation to pay interest, but the chance of reselling for a profit. So purchasing a negative-yield bond might make sense as an investment (vs.institutional and central bank bond buyers, which frequently hold bonds to maturity and thereby literally pay to lend money). But if and when interest rates rise, the losses to those left holding those $13 trillion of bonds could be staggering.

In the meantime, a huge artificial market for at least nominally positive US Treasury debt grows, strengthening the dollar and suppressing interest rates here at home. Once again, the dollar represents the least dirty shirt in the laundry. Congress loves this, of course, because even 5% rates would blow the federal budget to smithereens. Rising rates would cause debt service to be the largest annual line item in that budget, ahead of Social Security, Medicare, and defense. So we might say Congress and the Fed are in a symbiotic relationship at this point. The rest of the world might call it America’s “exorbitant privilege.”

Negative interest rates are the price we pay for central banks. The destruction of capital, economic and otherwise, is contrary to every human impulse. Civilization requires accumulation and production; de-civilization happens when too many people in a society borrow, spend, and consume more than they produce. No society in human history previously entertained the idea of negative interest rates, so like central bankers we are all in uncharted territory now.

Our job, among many, is to bring the insights of Austrian economics on money and banking to widespread attention before something truly calamitous happens.

Jeff Deist is president of the Mises Institute. He previously worked as chief of staff to Congressman Ron Paul, and as an attorney for private equity clients.