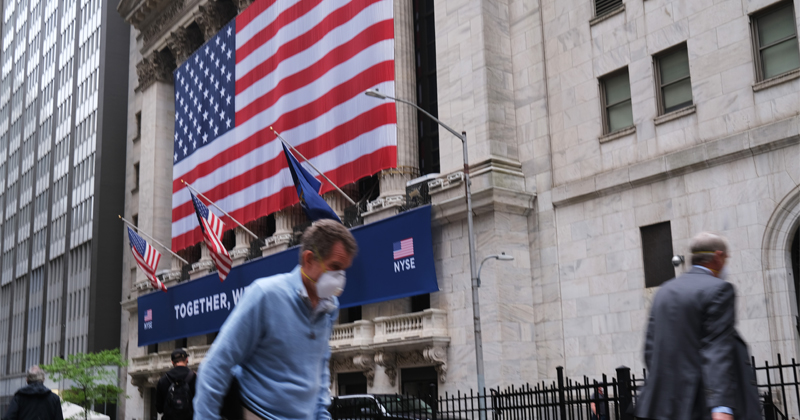 The Federal Reserve and the US government are rerunning the exact same policies they turned to in the wake of the 2008 financial crisis, but on a much grander scale.

We have bigger QE, more money printing, more government spending and bigger deficits. During his podcast, Peter Schiff said it was a mistake then, but they got away with it. They won’t get away with it this time.

A lot of people still believe we will flip a switch, the economy will fire right back up and everything will just snap back to normal. But as states begin opening up their economies, where are the jobs?

You would think we’d see jobs coming back, but instead, we see more people fling for unemployment. Another 2.4 million Americans filed jobless claims last week. In just nine weeks, 38.6 million people have filed for initial unemployment aid. That’s 23.7% of the March US labor force. Peter asked the operative question: why are we still losing millions of jobs if we’re close to turning the economy back on.

“Wouldn’t some of these companies be getting a jump on it? Wouldn’t they be bringing back some of their workers? Or at least stop laying them off? The fact that we can still keep losing jobs by the millions in the span of a week just shows you that we’ve got a lot more to this downturn than people think.”

Meanwhile, the Federal Reserve continues to run its money printing press at full-speed. Last week, the Fed added another $225.4 billion in funny money to the money supply. It has increased by 13.4% in just eight weeks. The central bank added another $103 billion to its balance sheet. It now stands above $7 trillion.

To put the expansion of the Fed balance sheet in perspective, QE3 was a mere $85 billion per month. The balance sheet peak during the three rounds of quantitative easing after the 2008 financial crisis was $4.5 trillion. The Fed managed to shrink it back to around $3.8 trillion. So, the central bank has nearly doubled the size of its balance sheet in just a little of two months. Peter called this an “amazing feat.”

And there is no sign that the Fed intends to slow the presses. We could easily see a $10 trillion balance sheet by the end of 2020. The crazy thing about it is that nobody cares. Nobody is worried about this.

When the Federal Reserve launched QE1 after the ’08 crash, there were some people who were concerned. Even people in the mainstream worried about money creation. You might recall Larry Kudlow expressed concern. At the time, he asked, “How do we unwind from this unprecedented government intervention.” And he wasn’t alone. But today, virtually nobody is concerned. In fact, everybody seems to be good with it despite the fact that it’s much bigger than it was then.

Because we got away with it last time. Everybody thinks it worked. They say, “Hey, we didn’t get the inflation.” In effect, the central bank managed to kick the can down the road for an entire decade. Peter said he didn’t anticipate that we could delay the consequences as long as we did.

“There’s no way we’re going to do it again. But what everybody else thinks is because it worked last time, it’s going to work again. Because we got away with QE 1,2, and 3, well, we’ll get away with QE 4, even though it’s much bigger.”

That’s not going to happen.

The Fed is conjuring up all of this money and injecting it into the economy, but it isn’t adding any value to the economy.

Think about it this way. When you get a check from the government, you now have money to make claims on goods and services. At whose expense? The person who already had claims of their own. That person’s money buys less because you get to buy something with the new money the Fed creates. It’s more dollars chasing the same amount of stuff. That means it takes more dollars to buy the same amount of stuff. This is the mechanism of inflation.

The Fed got away with all of this in 2009 and the years following. It managed to blow up a bigger bubble.

“We’re repeating those mistakes on an even grander scale and we’re doing it in an even weaker economy because we never really recovered from the recession of ’08. We papered that over with a bigger bubble. So, instead of correcting the imbalances that existed, we made the imbalances bigger. We went even deeper into debt. And so now that this even bigger bubble has popped, the Fed is back to the drawing board doing exactly what it did before, only printing a lot more money, running much bigger deficits, and so this time there is no way to kick this can. We are now going to experience everything that I assumed we were going to experience back then, only much worse. Only a much deeper collapse. Even more inflation than we had then.”

In this podcast, Peter also talked about op-eds by Paul Krugman and Stephen Moore – two people who are supposedly at opposite ends of the spectrum. As it turns out, they’re on the exact same page when it comes to the Federal Reserve.