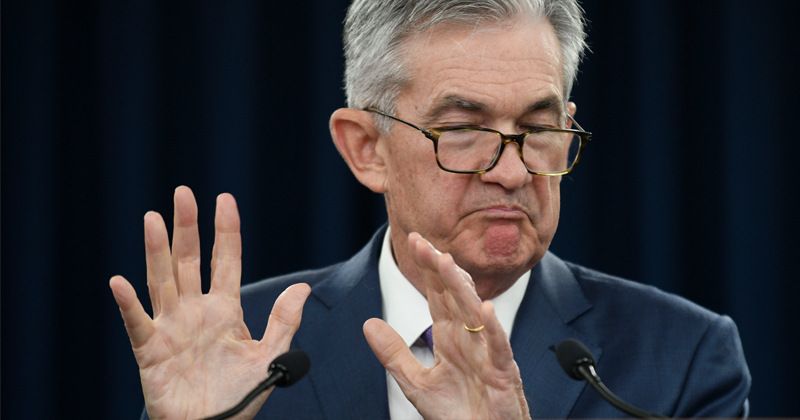 The Federal Reserve did exactly what the markets expected on Wednesday, cutting interest rates by another 25 basis points.

The central bank sent out mixed signals about what will happen next. Markets widely construed the Fed’s messaging as somewhat hawkish. In its policy statement, the Fed said the US economy is growing at a “moderate” rate and the labor market “remains strong. It cut rates, “in light of the implications of global developments for the economic outlook as well as muted inflation pressures.”

In his podcast, Peter Schiff reiterated this was just another step toward zero and said whatever the Fed wants to call its mechanizations, they’re going to stink to high heaven.

Fed Chair Jerome Powell was specifically asked about negative rates during his press conference. He said the Fed wasn’t really thinking about that, but Peter said, “Of course, we’ll see what happens when we get to zero and problems aren’t solved.”

The rate cut vote was 7-3. Two members of the FOMC didn’t want any cuts and Jim Bullard wanted a 0.5% cut.

As Peter pointed out, the Fed met market expectations, as it usually does.

Markets didn’t react significantly to the Fed’s move. Stocks initially sold off. The Dow was down close to 200 points after the announcement, but recovered to close slightly positive. Gold fell below $1,500 but was back above that level Thursday morning. The dollar gained slightly.

Peter said the more significant move that the mainstream didn’t pay much attention to was the repo operations that the Fed ran Tuesday and Wednesday mornings. In a nutshell, there wasn’t enough liquidity in the financial system. There weren’t enough lenders to meet the needs of the borrowers and the repo rate skyrocketed. So, the Fed stepped in and injected billions of dollars into the system to push interest rates back down. Peter said this is a “big deal.”

“It shows that the Fed is losing control of the short end of the curve, that market forces are beginning to overwhelm the Fed’s attempts to artificially suppress interest rates.”

Ironically, during the post-FOMC meeting Q&A, Powell wondered out loud why interest rates – particularly on the long end – are so low.

“It hasn’t dawned on Powell that the reason interest rates are low is because of the Fed. It’s not because of some weird thing going on in the economy. Interest rates are low because central banks around the world are artificially suppressing them. It makes no sense fundamentally to be as low as they are, especially in the United States where we have minimal savings and everybody is loaded up with debt.”

Powell continues to insist the economy is strong and the last two rate cuts are merely precautionary.

“The markets are seeing the recession that the Fed is denying. And of course, even if the Fed sees it, it thinks its job is to deny it because it wants to engender confidence to delay the onset of the recession as long as possible. But the markets are seeing this recession and they are bringing rates down in advance to front-run the Fed because they know exactly how the Fed is going to react the next recession. In fact, the Fed is telling you. If they are surprised, if their rosy forecast proves wrong, they are slashing rates, they’re doing more QE and the bond traders have been trying to front-run.”

Peter said QE is the problem. The problem is that interest rates are too low. And the longer the central banks keep them this low, the worse the problems are going to get. Peter compared the central bankers to medieval doctors bleeding their patients.

But the Fed doesn’t want to deal with the problems that allowing interest rates to normalize would cause. So, they continue to work to keep them down. This is exactly what the Fed did with its repo operations earlier in the week. It essentially created money out of thin air and injected it into the financial system.

During his press conference, Powell actually said the Fed may have to resume balance sheet expansion. That’s basically an admission that QE4 is on the horizon. They probably won’t call it quantitative easing. The current term being tossed about is POMO (Permanent Open Market Operations). Peter said it’s all semantics. When you boil it all down, it’s really just debt monetization.

“Basically, it doesn’t matter. Debt monetization, quantitative easing, by any other name, it still stinks. And whatever the Fed is going to do, it’s going to stink to high heaven.”