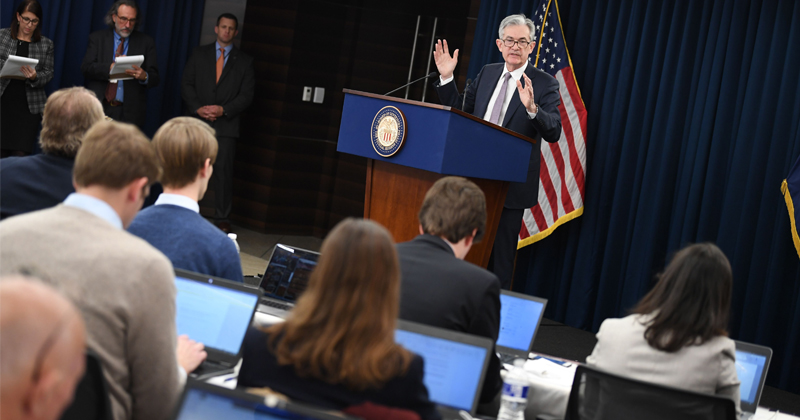 As expected, the central bank held interest rates steady but the overall posture of the Fed came off as rather dovish. Quantitative easing will continue into the near future and Fed Chairman Jerome Powell left the door open for future rate cuts.

The Federal Reserve funds rate will stay locked in at 1.25 to 1.5% and the vote was unanimous. Powell said, “We’re comfortable with our current policy stance and we think it’s appropriate.”

The Fed continued to tout a relatively healthy US economy, citing a “strong labor market” and low inflation, but expressed some misgivings about global economic growth and the risk of the coronavirus.

The Fed appears to be obsessing over inflation – or what the central bankers perceive as a lack thereof. Powell continues to use the term “symmetric inflation” indicating that the Fed would be OK with inflation running higher than 2% to make up for the lower numbers we’ve seen over the last several years.  Powell said, “We’re not satisfied with inflation running below 2%, particularly at a time such as now where we’re a long way into an expansion and a long way into a period of very low unemployment, when in theory where inflation should be moving up.”

Peter Schiff has said that the central bank is eventually going to let the inflation Genie out of the bottle and once that happens, it won’t be able to control it.

As the Wall Street Journal put it, the Federal Reserve’s statement and Powell’s post-meeting comments indicated that if the Fed were to make any move on rates in the near future, it would be a cut. In fact, bets placed on futures contracts tied to Fed policy reflect expectations that the Fed will hold rates steady until the fall. At that point, they’re betting on another rate cut.

A nurse in New York called in to The Alex Jones Show to report that she believes she has been dealing with the coronavirus in The Big Apple.

Peter Schiff has said that the central bank will ultimately cut all the way back to zero. Just before the Fed raised rates for the final time in December 2018, Peter appeared on Fox Business and predicted it would be the last hike and that the next move would be a cut and a return to quantitative easing. The central bank lowered rates three times last year and launched a $60 billion per month bond-buying program. In an interview on RT Boom Bust this week, Peter said the Fed’s accommodative monetary policy is the only thing keeping the stock market bubble inflated.

“The stock market should be coming down. The only thing really supporting it is the Federal Reserve and all the money they’re printing with their stealth QE program, although it’s not stealth really. Everybody knows they’re doing it. They just refuse to admit it. But there’re no earnings behind this. There’s no strong economy behind this. This is an inflation-driven bubble, but the air should be coming out.”

Speaking of quantitative easing, the Fed’s statement did not announce any changes to the bond-buying program. So, QE continues on into the foreseeable future, although the Fed chair continues to insist that it isn’t QE. Given that the Fed has added some $200 billion to its balance sheet through the program, it’s hard to call it anything but quantitative easing.

Powell did indicate that the central bank would look to scale back the program in the April to June period. From there, he said the Fed would continue making purchases “as necessary” to ensure that the reserves on the bank’s balance sheet remain “ample.”

According to Reuters, “Fed policymakers have been discussing how and when to end the temporary Treasury bill purchases, which have been underway since October, and what sort of permanent replacement it could use to ensure the central bank keeps control of the federal funds rate.”

In other words, it looks more and more like QE is going to be permanent.

Gold gained after the Fed announcement. As Peter has noted, bad monetary and fiscal policy is good for gold. During a recent interview with Daniela Cambone, Peter noted gold peaked at $1,900 in 2011 after a 10-year run where gold stated below $300. Gold got that high because people initially had the correct reaction to quantitative easing and zero percent interest rates. But the Fed managed to convince the mainstream that it could normalize interest rates and unwind QE and shrink its balance sheet. Gold pulled back on that false belief. It’s becoming abundantly clear that “emergency measures” are not the norm with low interest rates and QE the rule instead of the exception.

“Now that people are coming to the conclusion that QE is indefinite and that rates are never going to normalize, the bottom is going to drop out of the dollar and that means gold goes through the roof.”

Powell addressed the impact of low interest rates on savers. He said that he “absolutely sympathized” with people whose savings have been wrecked by the central bank’s low interest rate policy, but he also said “many, many people benefit” from low interest rates and “we have to do what’s overall best for the society and the economy.”

Peter summed up Powell’s message on savings in a tweet.

Powell basically said that losses suffered by savers are acceptable collateral damages because its low interest rate policy is good for debtors and homeowners. The Fed’s message is clear — never a saver be. Too bad savings is the seed corn for real economic growth. Buy gold!”