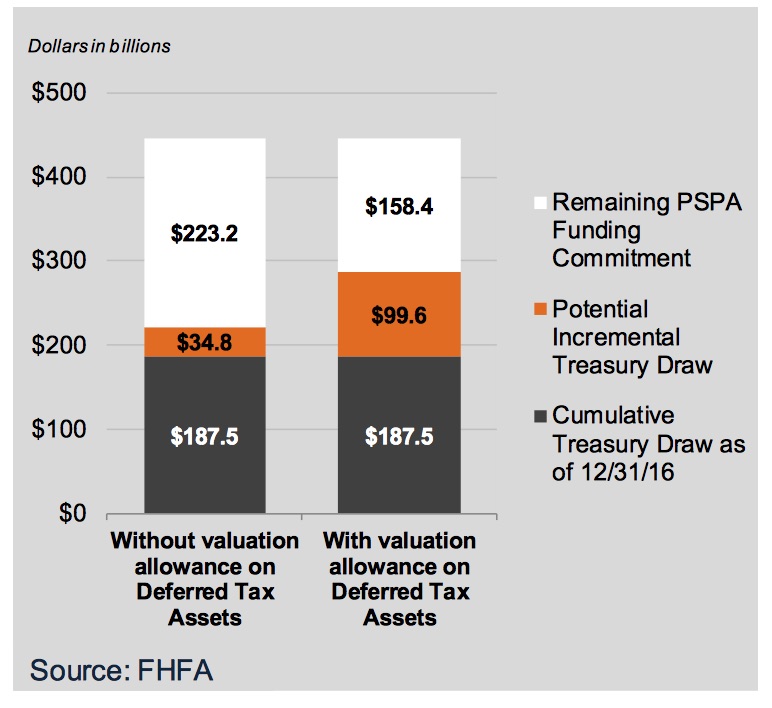 WASHINGTON, D.C. – The Federal Housing Finance Agency’s (FHFA) publication on Monday, Aug. 7, of the most recent implementation of the Dodd-Frank Act Stress Tests (DFAST) for Fannie Mae and Freddie Mac leaves no doubt the “Net Worth Sweep” should be ended this quarter, with the two Government Sponsored Enterprises (GSEs), given that under the most severe credit-loss scenario neither GSE is at any risk of depleting their remaining Treasury commitments.

“The FHFA DFAST analysis released this week demonstrates if the GSEs did not establish a valuation allowance on their deferred tax-assets, under the most severely adverse scenario, the GSEs would require $34.8 billion in capital,” Joshua Rosner, managing director of the independent research firm Graham Fisher & Co., headquartered in New York City, explained to Infowars.com in an exclusive email.

“With the establishment of a valuation allowance on their DTAs they would require $99.6 billion,” Rosner continued. “Under this adverse scenario the GSEs combined credit-losses would be $19.2 billion or .38bp of their portfolios. Neither GSE would be at risk of coming anywhere depleting their remaining Treasury commitments.”

Rosner is a widely-recognized authority on Fannie Mae and Freddie Mac, known for co-authoring with Pulitzer Prize-winning business reporter the 2011 bestselling book entitled, Reckless Endangerment: How Outside Ambition, Greed and Corruption Led to Economic Armageddon, an analysis of Fannie Mae’s role in the sub-prime mortgage crisis that led to the economic downturn of 2008/2009.

“It is increasingly clear that, in 2008, Congress passed, and President Bush signed, appropriate and effective legislation in the form of the Housing and Economic Recovery Act,” Rosner stressed.

“While Congress may choose to try to legislate changes to fine-tune the reforms, there is little reason and less legislative will to engage in a full-scale recreation of the secondary mortgage market,” Rosner concluded.

“Given this lack of will, we continue to expect the Director of FHFA will suspend the net-worth-sweep before the end of the year,” Rosner stressed. “We further expect that he, in coordination with the President and Treasury Secretary Mnuchin, will then begin the process of finalizing administrative reforms to the GSEs and place them on a path to privatization.”

Given that the remaining PSPA funding commitment is clearly sufficient even under the FHFA’s DFAST Severe Adverse Scenario, the prudent policy alternative for the Trump administration would involve ending the “Net Worth Sweep” at the end of the third quarter, as Rosner suggests above.

Ending the “Net Worth Sweep” would allow FHFA Director Mel Watt, as he explained in his May 11 testimony to the Senate Banking Committee, to fulfill his obligation as Fannie/Freddie conservator under the Housing and Economic Reform Act of 2008 (HERA) to retain GSE earnings, so as to rebuild capital within Fannie and Freddie, establishing the capital reserves needed to weather any operating losses experienced in the future without requiring a repeat of the 2008 federal bailout.

The FHFA in their publication on Aug. 7 of the report entitled “Dodd-Frank Act Stress Tests Results: Severely Adverse Scenario,” described the 2017 DFAST Severely Adverse scenario as “based upon a severe global recession which is accompanied by a period of elevated stress in corporate financial and commercial real estate markets. It includes large reductions in asset prices, significant widening of corporate bond spreads, and strained market liquidity conditions.”

As shown in Table 1 below, the FHFA concluded that as of December 31, 2016 the GSEs had drawn a combined $187.5 billion from the Department of the Treasury under the terms of the Senior Preferred Stock Purchase Agreements (PSPAs), and the combined remaining funding commitment under the PSPAs was $258.1 billion.

In the Severely Adverse Scenario, incremental Treasury draws were projected to range between $34.8 billion and $99.6 billion depending on the treatment of deferred tax assets.

The assumptions used in the FHFA’s 2017 DFAST definition of a Severely Adverse Scenario presume a severe economic downtown that would include the following conditions: unemployment would increase from 4.7 percent to 10 percent in the third quarter of 2018; real GDP begins to decline, reaching a trough in the second quarter of 2018, after a decline of 6.5 percent from the pre-recession peak; and the consumer price inflation rate declines to about 1.25 percent by the second quarter of 2017, and then rises to approximately 1.75 by the middle of 2018.

The FHFA projected these Severely Adverse Scenario conditions would cause home prices to decline by approximately 25 percent, and commercial real estate prices fall by 35 percent through the first quarter of 2019.

Even with this severe a projected economic downturn, the FHFA credit losses were projected to reach only $19.2 billion, 0.38 percent of the average portfolio balances of Fannie and Freddie combined, as seen in Table 2. 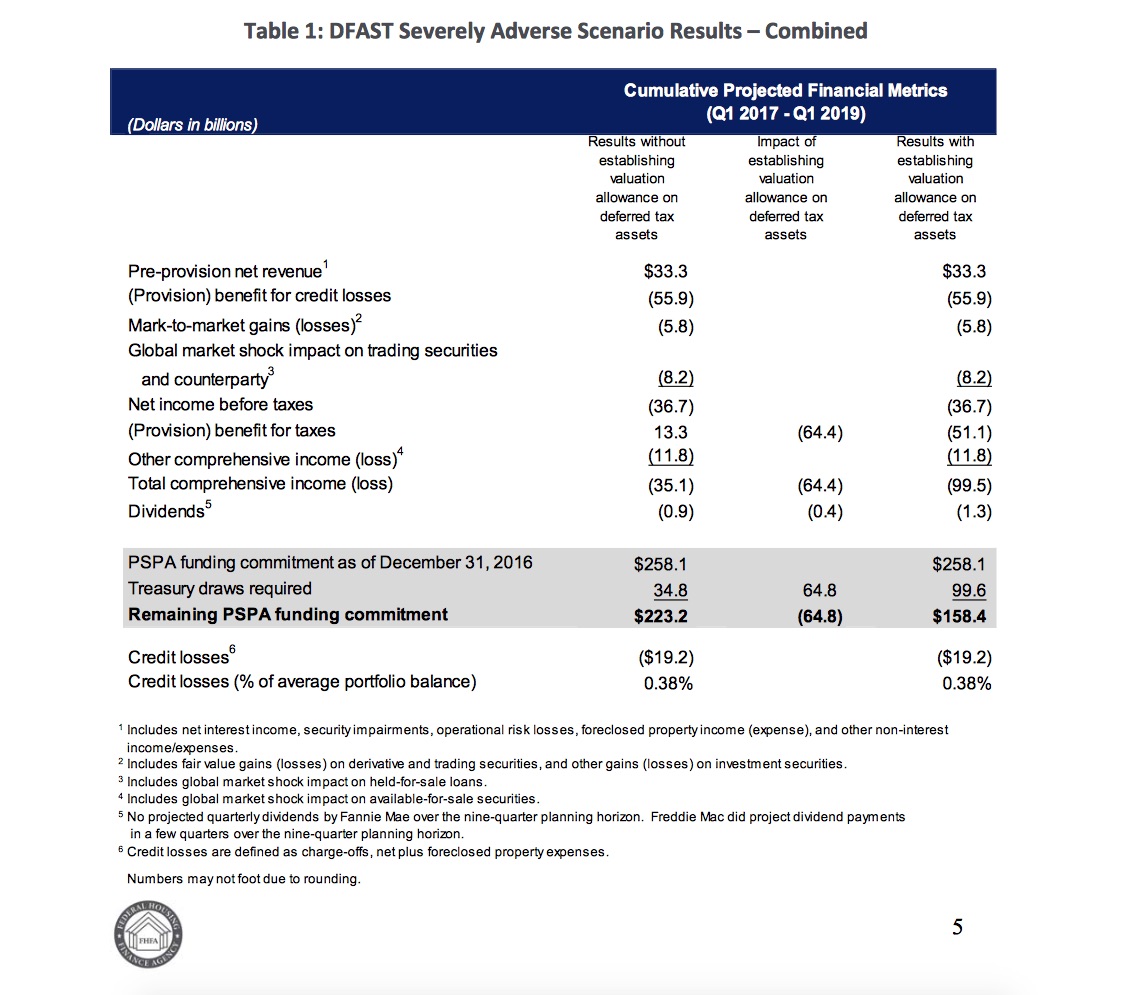 Even assuming the calculation of a valuation allowance on Deferred Tax Assets, Fannie and Freddie would have a remaining PSPA funding commitment of $158.4 billion, meaning the GSEs would not have to call on additional federal bailout funds to keep meeting current obligations.