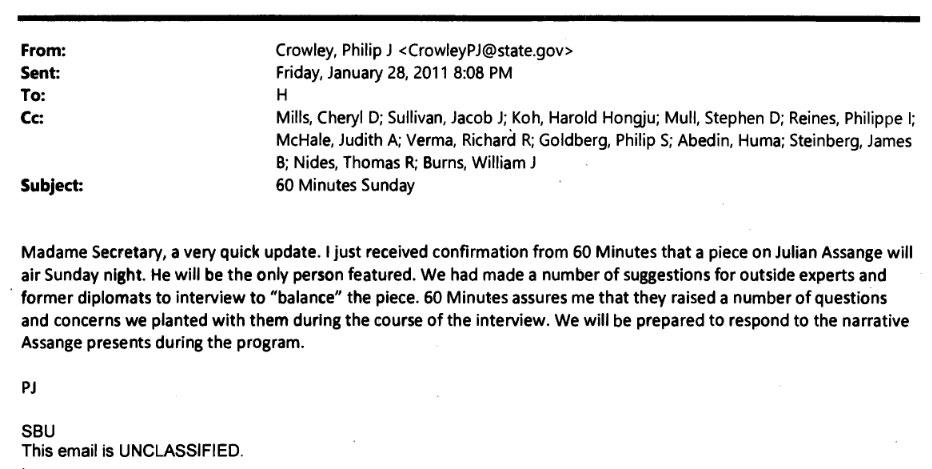 The latest batch of Hillary Clinton emails released by the State Department this week show the federal government worked with CBS News to plant talking points into an interview with Wikileaks founder Julian Assange. 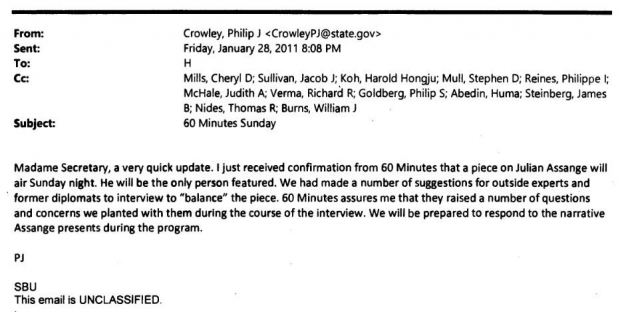 In a January 2011 email to Clinton, Philip J. Crowley, then assistant secretary of state for public affairs, confirmed that he had successfully “planted” numerous “questions and concerns” with 60 minutes for their upcoming report on Wikileaks.

“I just received confirmation from 60 Minutes that a piece on Julian Assange will air Sunday night. He will be the only person featured…” Crowley wrote. “60 Minutes assures me that they raised a number of questions and concerns we planted with them during the course of the interview.”

Crowley went on to inform Clinton, who has railed against Assange since Wikileaks’ inception, that their collusion with 60 Minutes would prepare them for a response to “the narrative Assange presents during the program.”

According to Crowley, the federal government’s intervention into the program was designed to “balance” the reporting.

“We had a number of suggestions for outside experts and former diplomats to interview to ‘balance’ the piece,” Crowley adds.

As noted by Mashable’s Jason Abbruzzese, “Of the more than 7,000 emails released, Wikileaks turn up in about 50 of them.”

“The documents released show that Clinton and her staff were worried about Wikileaks — but they were also cheered by some of the positive press for U.S. diplomats that resulted from the release of clandestine U.S. diplomatic documents,” Abbruzzese writes.

Assange has been a noted critic of Clinton for the past several years, calling the former secretary of state’s positions “more hawkish than Barack Obama’s.”

“I’ve come to know Hillary quite well as a result of reading her cables — reading thousands of her cables,” Assange said last year. And I might not be telling anyone anything new when I say that Hillary’s positions are even more hawkish than Barack Obama’s.”

This latest email provides yet another snapshot of the continued complicity between the federal government and the establishment press, whose credibility in the eyes of Americans has hit an all time low.