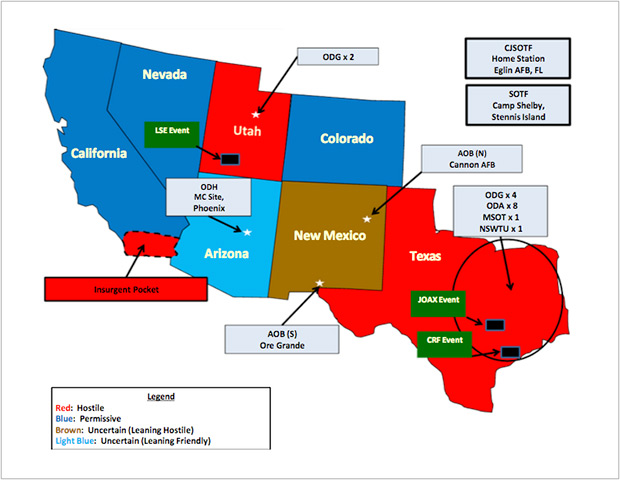 Alex Jones talks with Infowars reporter and Army veteran Joe Biggs about a newly released military document detailing the US Army’s plan to wage war on the American people.

Multiple branches of the US military, including Green Berets, Navy Seals, and the 82nd Airborne Division, will participate in the 8-week long exercise, which may result in “increased aircraft in the area at night.”

Troops will be tasked with honing advanced skills in “large areas of undeveloped land with low population densities,” and will work alongside “civilians to gain their trust and an understanding of the issues.”

The exercise, in which some participants will be “wearing civilian clothes and driving civilian vehicles,” lists Texas and Utah as “hostile” territory.

According to the document, Texas was chosen due to the state’s “historically supportive… efforts to prepare our soldiers, airmen, marines and sailors to fight the enemies of the United States.”

Despite the document’s claims, multiple Army training manuals and studies in the past have specifically targeted such states due to concerns over the growing influence of right-leaning ideologies and groups, such as the “Tea Party.”

A leaked 2012 US Army Military Police training manual, entitled “Civil Disturbance Operations,” described how soldiers would be ordered to confiscate firearms and kill American “dissidents.” The manual also revealed that prisoners would be detained in temporary internment camps and “re-educated” to gain a new appreciation of “U.S. policies,” in accordance with U.S. Army FM 3-19.40 Internment/Resettlement Operations.

In the past, large scale domestic military exercises have also included foreign countries.

During a training drill in April 2012, the United States trained soldiers from Russia, hosted in Fort Carson, Colorado, on how to target American terrorists.

And just last year, US Special Forces and commandos trained with troops from 16 foreign nations, including Colombia, France and Germany, in Tampa, Fl., practicing how to coordinate aerial, ground and aquatic operations.

Although nations can benefit from joint drills, the exercises also serve to blur the lines of national sovereignty, slowly leading to the formation of a North American Union, as mentioned by former CIA head General David Petraeus.

Another troubling aspect of domestic drills is the apparent erosion of the Posse Comitatus Act, which the 2007 John Warner National Defense Authorization Act scaled back to allow the armed forces to “Restore Public Order” during events declared national emergency.

See the US Army Special Operations Command’s Powerpoint slides regarding the “Realistic Military Training” drills below:

Watch: Reporter Joe Biggs explains why this latest military training exercise isn’t like the others: