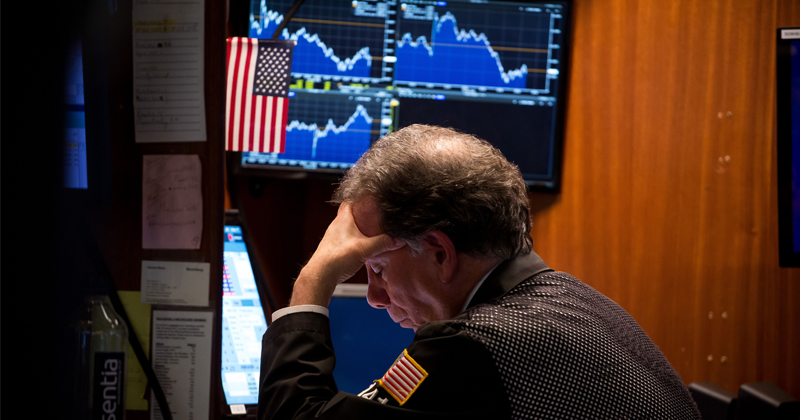 Stop and pause for a moment and think about what just happened.

The Federal Reserve says the US economy is strong, but it just initiated emergency monetary policy last seen during the worst financial crisis since the Great Depression.

Something doesn’t add up.

The Fed cut rates 50 basis points on Tuesday. It was the first interest rate move between regularly schedule FMOC meetings since the 2008 financial crisis. The Fed funds rate now stands between 1.0 and 1.25%.

The decision to cut rates was unanimous.

As the Wall Street Journal pointed out, this kind of Federal Reserve move has been reserved for “when the economic outlook has quickly darkened, as in early 2001 and early 2008, when the US economy was heading into recession.” The 50-basis point cut was the first cut of such magnitude since December 2008. Pacific Management investment economist Tiffany Wilding called it a “shock-and-awe approach.”

It may have been shocking, but the results weren’t awesome.

Meanwhile, gold rallied, quickly pushing back above $1,600 and gaining over $50. Wednesday morning, the yellow metal was knocking on the door of $1,650.

Bond yields sank again as investors continued their retreat into safe-havens. The yield on the 10-year Treasury dipped below 1%.

In a press conference after the announcement, Federal Reserve Chairman Jerome Powell said the central bank “saw a risk to the economy and chose to act.”

“The magnitude and persistence of the overall effect on the US economy remain highly uncertain and the situation remains a fluid one. Against this background, the committee judged that the risks to the US outlook have changed materially. In response, we have eased the stance of monetary policy to provide some more support to the economy.”

Just the day before, Powell hinted at the possibility of a rate cut while insisting “The fundamentals of the US economy remain strong. However, the coronavirus poses evolving risks to economic activity.”

Mises Institute senior editor Ryan McMaken pointed out that Powell’s statement sounds an awful lot like John McCain in September 2008 when he said, “The fundamentals of our economy are strong, but these are very, very difficult times.”

McMaken raises the crucial question: If fundamentals are so strong, why the need to enact the biggest rate cut in more than a decade?

And further, “If the Fed is slashing interest rates while ‘fundamentals are strong,’ what must it do when things aren’t so ‘strong?’ Negative rates and QE seem to be the logical next step.”

Of course, the Fed has been engaged in QE that it calls “not QE” for months already.

In his podcast Tuesday, Peter Schiff put it another way.

“You shoot your bullets at Super Man and they bounce off his chest; then what do you do?”

“Just like the guy from Jaws, ‘We’re gonna need a bigger boat to catch this shark,’ the Fed is going to need a much bigger rate cut if they want to stop this bear market.”

But Schiff said he doesn’t think there’s a big enough rate cut to do it.

From a practical standpoint, it remains unclear how an interest rate cut will solve the potential economic problems associated with coronavirus. It appears that the move was primarily intended to rescue the financial markets. This is not unlike the way the Fed moved when stocks started to tank in the fall of 2008. In a rather convoluted statement, Powell even conceded that rate cuts won’t address the specific economic issues raised by the virus.

“A rate cut will not reduce the rate of infection. It won’t fix a broken supply chain. We get that. But we do believe that our action will provide a meaningful boost to the economy.”

The real worry for the Fed is that the stock market will pull the economy down with it. After all, the central bank built the economic “recovery” after the 2008 financial crisis on a “wealth effect.” Easy money pumped up asset prices and made people feel richer. If that wealth effect unwinds, the underlying economy will likely unwind with it.

Schiff said another concern is the amount of debt built up in the economy going into the next recession. Normally, during an expanding economy, people pay down debt. But over the last decade, Americans have piled on debt. The federal government is running trillion-dollar deficits. Consumer debt is at record levels. Rising levels of corporate debt have even set off warning bells at the Fed.

“So, if we have another economic downturn, that debt is a much bigger problem than its ever been in other recessions. It’s likely going to cause a worse financial crisis than the one we had in 2008. And so to try to keep that from happening, the Fed is cutting rates, because it wants to make it easier for people who have debt to service that debt. And it also wants to delay the recession it knows we can’t survive.”

The Fed simply doesn’t have the bullets in its arsenal to fight a deep recession. That’s why it is firing them know, hoping to hold it off. But Schiff said the best-case scenario is that they buy some time. To do that, they’re going to need bigger rate cuts.