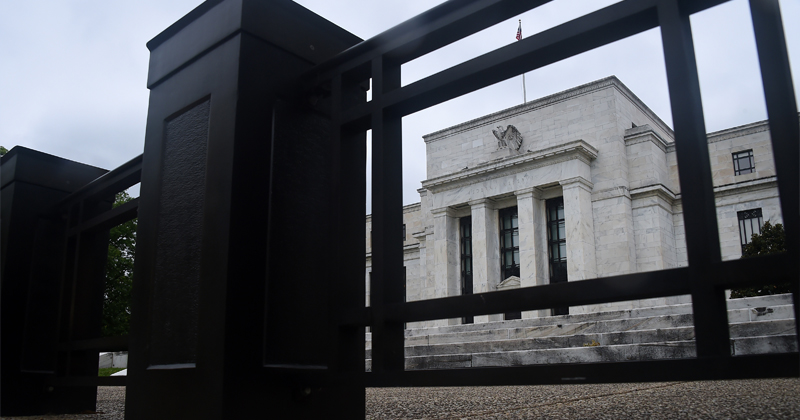 Peter Schiff has called it a “monetary Hail Mary,” but virtually nobody in the mainstream questions the wisdom of the Federal Reserve unprecedented response to the economic impacts of the coronavirus pandemic.

And it truly is unprecedented. It’s not just zero percent interest rates and QE infinity. The Fed is buying everything but the kitchen sink. It’s now even become a player in the corporate bond market.

But the mainstream is all-in with the Fed. The consensus seems to be what we call extraordinary monetary policy is really prudent monetary policy. Some even claim it’s “modest” given the circumstances. Any concerns expressed about the central bank’s actions tend to end with, “But what else can they do? They have to do something.”

But there are some economists along with Peter crying out in the desert. Mises Institute Senior Editor Ryan McMaken recently interviewed economist Bob Murphy who provided some much-needed insight into what the Fed is actually doing.

The following was originally published at the Mises Wire.

Ryan McMaken: We’re in a very odd situation right now in terms of evaluating the state of the economy. We can see that there is rising unemployment, and there is likely to be a wave of missed mortgage and rent payments. Is this all just due to the government-mandated “shutdowns” or are there deeper economic issues here?

Robert P. Murphy: In economics, there are no controlled experiments, so partisans on a policy dispute can both continue to claim that the evidence is on their side. That’s why Keynesians and Austrians still disagree about the “lessons” of the 1930s, or whether the Obama stimulus package created or destroyed jobs.

During the present economic crisis, I am firmly in the camp that it was not due merely to the coronavirus or even to the (counterproductive) coercive lockdowns that various governments instituted, ostensibly as a public health response. I agree with Jeff Deist, who argued back in April that “The supposed greatest economy in US history actually was a walking sick man, made comfortable with painkillers, and looking far better than he felt—yet ultimately fragile and infirm. The coronavirus pandemic simply exposed the underlying sickness of the US economy. If anything, the crash was overdue.”

What evidence can we marshal to support such a perspective? Well, I have been far from flawless in my economic prognostications, but back in October 2007 I did write an article for Mises.org, worrying that the US could be in store for the worst recession in twenty-five years—this was almost a full year before the actual crash in the fall of 2008. And in that article I wasn’t throwing darts at a GDP chart; instead, I used Austrian business cycle theory to gauge the extent of Fed distortions in the financial system.

Now, if I then made a good prediction in real-time based on Austrian theory and Greenspan’s artificially low interest rates, that gives me confidence that the Fed’s post-2008 rounds of QE (quantitative easing) and seven full years of virtually zero percent interest rates quite clearly drove the booming stock market under Obama, yet set us up for a much bigger crash.

Even non-Austrians had enough information to know to worry. Back in September of 2019, I explained how the inverted yield curve signaled an impending recession for the summer of 2020—i.e., right now.

RM: As the crisis grew during March, the Fed lowered the target rate from 1.75 to 0.25 percent in a two-week period. That’s a big drop. What was the Fed trying to do when it did this, and can it achieve its goals?

RPM: I think regular Americans would be shocked if they realized just how crude the basic models are that guide central banking policy. I’m simplifying somewhat, but the official rationale was that a weak/panicked economy needs more spending in order to maintain employment, and the way you goose spending is to lower interest rates. There’s also the notion that the markets want reassurance that the Fed is waiting to help, and so by taking a “bold” move quickly, the Fed could possibly nip a self-fulfilling prophecy in the bud.

Having said all of that, it’s possible that behind the scenes the real reason the Fed did what it did was that certain powerful players were caught with their pants down, and they needed cheap loans to salvage their positions.

I don’t think this was a wise move, and no, it won’t (in the long run) help the financial sector or the broader economy. In the Austrian view, interest rates aren’t merely a gas pedal/brake for spending; they help coordinate long-term plans made by consumers and businesses. So if the Fed pushes interest rates below the correct market level corresponding to genuine saving decisions and the state of the economy, then it will foster an unsustainable structure of production. This was Ludwig von Mises’s theory of the business cycle, which has yet to be appreciated by most other free-market economists—let alone the Keynesians.

RM: Many commentators on the Fed’s stimulus packages have claimed that it’s not really that big a deal because the Fed is only exchanging liquidity for collateral, and Fed stimulus is mostly just loans that will be paid back anyway. So is this just much ado about nothing?

RPM: Back when the Fed’s “extraordinary” injections of liquidity started, I argued that this nonchalance was wrong. Look, if the Fed wrote me a check for my Nissan Sentra for $100,000, then on the moment of sale my car would have a “market value” of $100,000 and the Fed would just be adding equal amounts to its assets and liabilities. Yet that clearly would bail me out, even though it would appear to be a mere “asset swap” rather than a transfer payment.

Put it this way: If the Fed’s injections of “liquidity” don’t really help the fat cats in the financial sector, then we can just cancel them and won’t affect anybody, right?

RM: We seem to now be in a time of unprecedented fiscal and monetary stimulus. In the past, there seemed to be some political and legal limits on what could be done in this regard. Why do you think there are now almost no limits on what the Fed and Congress can get away with in terms of spending and bailouts?

RPM: In an essay I wrote for a collection edited by David Howden and Joe Salerno, I argued that Ben Bernanke was “the FDR of central bankers.” What I meant was the Bernanke took the economic crisis and used it as an opportunity to fundamentally expand what Americans perceived as the proper role of the Federal Reserve. It wasn’t merely that Bernanke doubled the holdings of the Fed in mere months, but that the type of assets the Fed bought or lent against was greatly expanded.

To appreciate just how dubious these moves were, realize that the Fed back in 2008 created “Maiden Lane” LLCs, which were intermediate companies that would get loans from the Fed, then go out and buy mortgage-backed securities (MBS). Since the Fed didn’t have the statutory authority to buy MBS, they could say, “We’re not buying these forbidden assets, we’re just lending money to Maiden Lane LLC. We have the ability to lend money to whichever institution we want. Now if Maiden Lane LLC takes the money and goes and buys some mortgage-backed securities, that’s their business…” So, to reiterate, it’s not just that Bernanke’s Fed did things that were bad policies. They were also arguably illegal.

We see a similar phenomenon with Jay Powell and the coronavirus panic. When people are scared they let the authorities get away with all sorts of nonsense. The Fed got rid of reserve requirements in the last section of an addendum to the main press release of a surprise Sunday night meeting, and barely anybody even covered it.

Likewise with fiscal policy. Apparently the folks who brought us the Obama stimulus package were afraid of having its price tag exceed $1 trillion, but that’s obviously not stopping anybody now. The American people have been so desensitized to these gigantic numbers that nothing is shocking. But for what it’s worth, the CBO (Congressional Budget Office) itself is now saying that federal debt held by the public—as a share of the economy—will break 101 percent by October.

I think the only thing that will reinstill a sense of discipline is if there is a tangible and immediate reaction to these crazy policies. If a Fed announcement of more asset purchases causes the dollar to fall 20 percent against other currencies, or if the projection of another $1 trillion deficit causes Treasury rates to spike, then maybe Americans will stop looking to Washington as a magic source of financing.

NPR and Black Lives Matter are working together to destroy America.