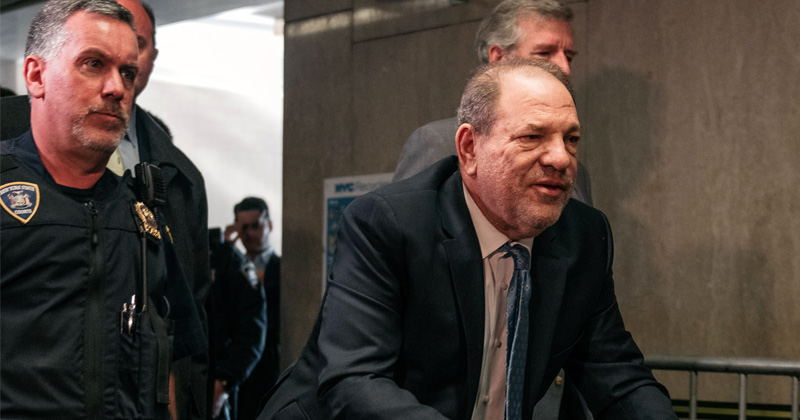 Former film producer Harvey Weinstein was found guilty third-degree rape and criminal sexual acts but was cleared of the top charges against him.

The jury of seven men and five women convicted Weinstein on the lesser charges but were deadlocked on the most serious charges against him, predatory sexual assault and first-degree rape, which analysts had predicted would be an uphill battle for prosecutors given the case they presented.

“Weinstein now faces charges in Los Angeles,” reported AP. “In that case, announced just as the New York trial was getting under way on Jan. 6, authorities allege Weinstein raped one woman and sexually assaulted another on back-to-back nights during Oscars week in 2013.”

“One of those women testified as a supporting witness at the New York trial.”

Weinstein faces five to 25 years in prison for the New York charges.

This isn’t good news for Hillary Clinton, who actually defended her relationship with the fallen producer just last month.

“How could we have known?” Clinton told the Hollywood Reporter. “He raised money for me, for the Obamas, for Democrats in general. And that at the time was something that everybody thought made sense.”

This contradicts a 2017 article by Ronan Farrow, who said Weinstein’s behavior was an “open secret:”

For more than twenty years, Weinstein, who is now sixty-five, has also been trailed by rumors of sexual harassment and assault.

His behavior has been an open secret to many in Hollywood and beyond, but previous attempts by many publications, including The New Yorker, to investigate and publish the story over the years fell short of the demands of journalistic evidence.

Too few people were willing to speak, much less allow a reporter to use their names, and Weinstein and his associates used nondisclosure agreements, payoffs, and legal threats to suppress their accounts.

Farrow later said that Clinton distanced herself from the Pulitzer Prize-winning journalist when she found out he was investigating Weinstein.

“It’s remarkable how quickly even people with a long relationship with you will turn if you threaten the centers of power or sources of funding around them,” Farrow told the Financial Times. “Ultimately, there are a lot of people out there who operate in that way.”

Weinstein’s downfall is similar to that of Jeffrey Epstein’s, another Clinton associate who had also faced sexual charges until his untimely death.