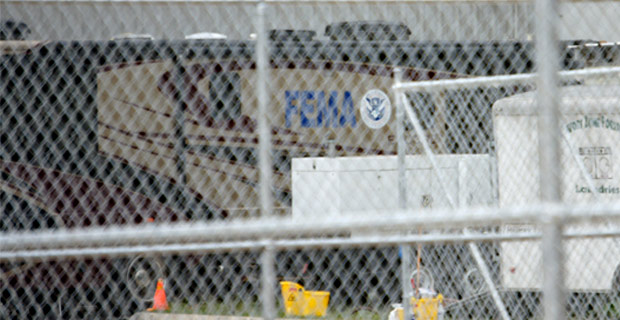 Federal Emergency Management Agency vehicles were spotted outside a new illegal alien shelter in McAllen, Texas, raising concerns that FEMA is using the border collapse to determine how to construct and manage detention centers for Americans during a government-declared crisis.

Both FEMA and the Border Patrol were present during construction of the new 55,000 square foot shelter, which is expected to house up to 1,000 immigrant children just three miles north of the border, and subcontractors were moving quickly to erect privacy fences to keep the controversial facility out of public view.

Nestled in a manufacturing complex less than a mile from the McAllen Border Patrol station, the revamped warehouse features benches, sleeping mats, laundry facilities, a recreational area, a mess hall and isolation units.

The shelter is divided into four sections, which each section containing holding cells for 252 detainees guarded by raised observation towers.

But the fact that FEMA is becoming more involved in detention facilities for illegal aliens is definitely stroking fears that the design of these shelters will be used to build centers for housing citizens during civil unrest or an economic crisis.

FEMA has already been developing a network of emergency detention camps across the United States for the past several years.

Subcontractors sought included fencing companies for temporary barricades, laundry services, medical care and catering companies that could provide meals for up to 1,000 people.

Two years before, Congress passed the National Emergency Centers Act (HR 645) which mandated the establishment of “national emergency centers” on military installations to provide “temporary housing, medical, and humanitarian assistance to individuals and families dislocated due to an emergency or major disaster.”

But the legislation was written to also “meet other appropriate needs, as determined by the Secretary of Homeland Security,” a broad mandate which many have feared could lead to the forced detention of Americans during a government-declared crisis.

These fears are valid considering how KBR began its partnership with FEMA on the planning of potential illegal alien shelters, which have now been implemented across the country, and since demand for the U.S. dollar is faltering across the globe, there is a real risk of a domestic economic collapse to which FEMA will respond by corralling protestors inside detention facilities similar to this one being built in McAllen, Texas.