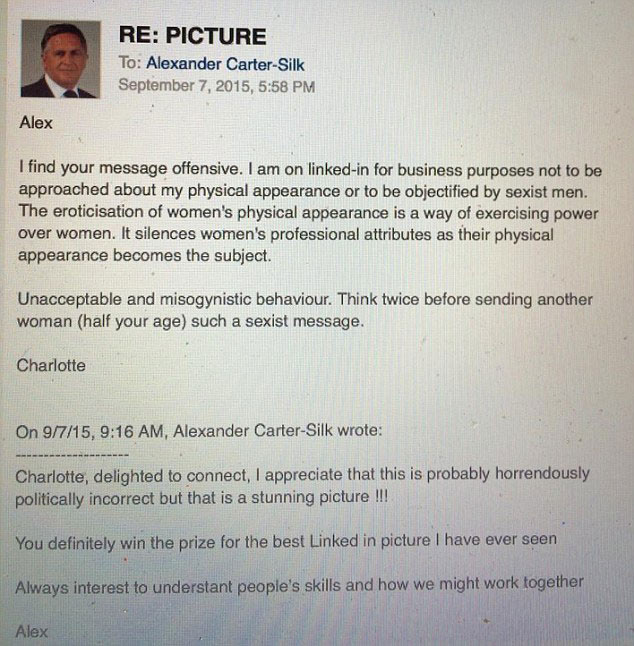 A feminist lawyer has publicly accused a man of “sexism” after he complimented her photo on LinkedIn.

The woman, 27-year-old Charlotte Proudman, garnered wide support from feminists for tweeting out a private message she received from intellectual property lawyer Alexander Carter-Silk complimenting her “stunning picture” and her response to him calling him sexist for his “unacceptable and misogynistic behavior.”

“Think twice before sending another woman (half your age) such a sexist message,” she wrote to Carter-Silk, discriminating him for his age while calling him “sexist.”

Proudman claimed she publicly shamed him because the “public interest in exposing sexism outweighed any privacy in this respect.”

Yes!! Go Charlotte. (@GeorgiaGMurray shame them and blame them) https://t.co/hln0KNSsQI

But is it really sexist for a man to tell a woman she has “the best LinkedIn picture” he had ever seen?

Yes, according to feminists who also claim it’s racist if you don’t sleep with people outside your race.

“Sexual racism… is closely associated with generic racist attitudes, which challenges the idea of racial attraction as solely a matter of personal preference,'” said pro-feminist researchers at the University of New South Wales.

So you’re racist if you don’t have interracial sex with women, but you’re also sexist if you compliment them.

That’s feminist “logic” in a nutshell; being male oppresses women!

In other words, feminists are way more sexist than the men they accuse of sexism.

This isn’t surprising considering the current feminist movement was hijacked by the global elite decades ago to create division within the U.S.

“The Central Intelligence Agency played a key role in hijacking second wave feminism via the work of Gloria Steinem, who is still a noted feminist icon today,” Paul Joseph Watson reported. “Steinem admitted that she was recruited by the CIA to infiltrate youth counter-culture movements in the late 1950’s, and subsequently emerged as a leading icon of second wave feminism in the 1960s.”

“The CIA’s role in steering and managing second wave feminism again underscores the fact that feminism is not a grass roots ‘people’ movement, it is a top down system of control used to divide and conquer and is run by powerful individuals who care little for actual women’s rights.”