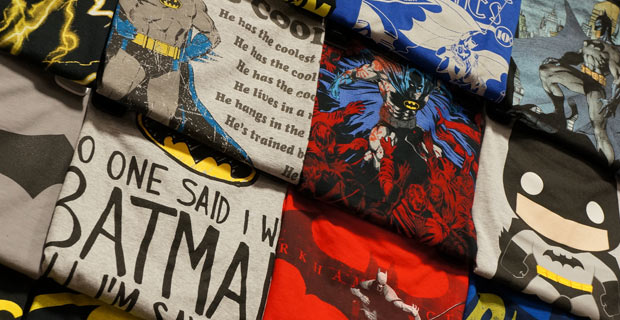 Feminists are offended by superhero t-shirts they claim are sexist because the shirts promote traditional gender roles, highlighting how the feminist movement was corrupted by the establishment to advance an “us vs. them” mentality between women and men.

One t-shirt in particular, which states “Training to be Batman’s Wife,” is receiving mass criticism from feminists who say it promotes a “chauvinistic” message.

“The idea that you should settle for being married to or sleeping with someone awesome instead of being the awesome person is insulting,” one blogger wrote. “This just happens to be aimed at a young girl.”

“I resent the idea that she should ‘train’ to be Batman’s wife; I’d rather her train to be the Joker, Penguin, or Catwoman.”

The blogger is likely unaware that in one Batman comic series, Catwoman pursued her romantic feelings towards Batman.

A social development professor at Canada’s University of Waterloo, Christine Logel, asked feminists on Twitter to send her photos of other “sexist” superhero t-shirts, including one shirt that states “I Only Date Heroes” underneath the Superman logo.

“They were really very easily and very quickly able to send me picture after picture that demonstrated this deeply held but not explicitly discussed bias to thinking about girls and women in terms of their sexual currency and men in terms of their capacity to conquest,” she said.

And a writer for Yahoo Style stated the shirts were “blatantly sexist” in an article entitled “Sexist Superhero T-Shirts Cause Controversy,” which received near universal damnation from thousands of commenters.

“DC [Comics] isn’t alone when it comes to producing chauvinistic apparel,” she wrote. “Last year, an ‘Avengers’ shirt for boys declared, ‘Be A Hero,’ while the shirt for girls said, ‘I Need A Hero.'”

A large portion of the commenters who criticized the article were women.

“Being a strong woman doesn’t preclude being a strong wife – most women want to be wives and to denigrate us by implying that these tongue-in-cheek shirts take our right to be a partner is rude, condescending and downright repulsive,” Anne Marie wrote.

Another commenter, Kim R., said she was tired of politically correct garbage propagating through the media.

“Get some humor people,” she wrote. “If your child is only getting his or her self-worth from a t-shirt then you need to look at your parenting skills and not at a silly t-shirt.”

The fact that these so-called feminists are up in arms about something as insignificant as a t-shirt is a reminder that the women’s rights movement, which empowered women to embrace their individual liberties, was hijacked in the 1950s by the CIA and others within the political elite to exploit women and corrupt gender roles, all while ignoring genuine women’s rights issues.

For one thing, feminists in the western world are notably silent about the harsh treatment women receive in other nations where rape is legal, girls are forced into marriage before the age of 10 and women cannot leave their homes without their husbands’ explicit consent.

“It doesn’t take much bravery to be critical of Western society,” social commenter Charlotte Hays wrote. “The real war on women is being waged elsewhere, however.”

“Shame on all those professional feminists in free societies who routinely dismiss the very women most in need of their support.”