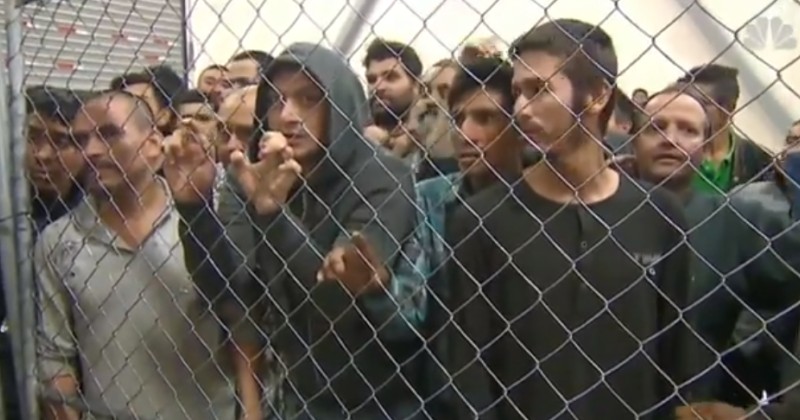 A video of overcrowding at a Texas detainment facility shows a large group of young men complaining about not being allowed to enter America.

The clip shows Vice-President Mike Pence and Sen. Lindsey Graham observing the scene as the detainees are packed into a holding pen behind a chain-link fence.

“No shower, no shower!” chanted the men.

“Reporters accompanying Pence described the facility as smelling “horrendous,” according to NBC News.

A group of men detained behind chain link fencing shouted to news cameras, "No shower, no shower!" https://t.co/iysmT8IUE1 pic.twitter.com/35KKyxb6w8

There appears to be a huge disconnect between how the media sees the conditions and how the Trump administration views the situation.

Despite admitting that the system is “overwhelmed,” Pence asserted that CBP officers were performing “compassionate work”.

These are grown men of prime fighting age. https://t.co/GFj5wBHoYG

Many respondents in the thread of the NBC tweet compared the scene to something out of Nazi Germany.

These monsters were supposedly Christian as well. pic.twitter.com/vX2rmSeS8w

This is absolutely disgusting. White, privileged men standing around, watching and enabling human suffering. The same white and privileged men who claims to follow the Bible.

Others were more rational, pointing out that the men chose to try to enter America illegally and could always go back home.

They don’t have to stay. They can go back. You don’t get to just push your way into a country you have to do it legally.

It happened because these ppl don’t have visas to come to the US. They are undocumented and to have a legal status they have to apply for a visa or have an sponsor. There is also a voluntary deportation. If they don’t want to be there, they can ask to be send back home.