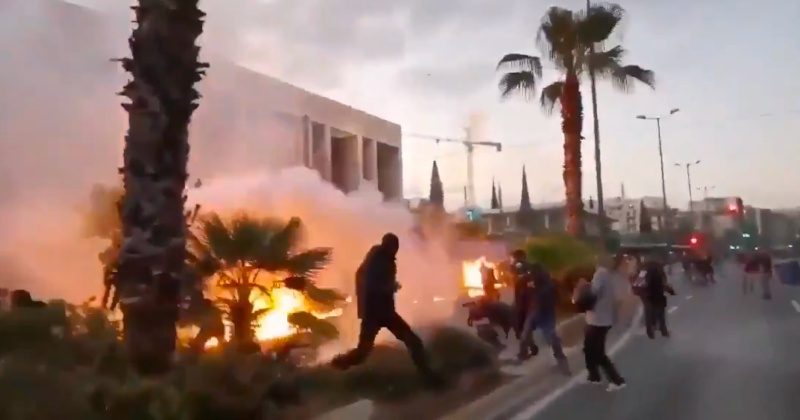 More signs that the US George Floyd protests, riots and general contagion of spiraling mayhem are spreading far outside America’s borders:

Demonstrators hurled firebombs in a march towards the U.S. Embassy compound in Athens on Wednesday in a protest over the death of George Floyd in Minneapolis.

Reuters journalists saw demonstrators throwing several flaming objects which erupted into flames on the street towards the heavily-guarded embassy in central Athens and police responding with rounds of teargas. – Reuters

Though like other large European cities, Athens has been prone to youth rioting at the drop of a hat of the past years, it was clear the unrest was in direct spillover of events in US streets.

Dramatic footage showed Greek demonstrators charging through police lines in a clearly coordinated effort and then hurling the petrol bombs.

Greek police said the crowd swelled to over 3,000 demonstrators at one point. Police were seen running through flames after multiple firebombs exploded on the ground, but didn’t appear to reach the main embassy building directly.

The attackers managed to get relatively close to the main embassy building:

Multiple molotov cocktails were thrown, caught on widely circulating social media videos; however, there were no instances of serious perimeter breaches or reported injuries among the police or Marine embassy guard.

More footage of Wednesday’s chaos on the embassy steps in Athens below: