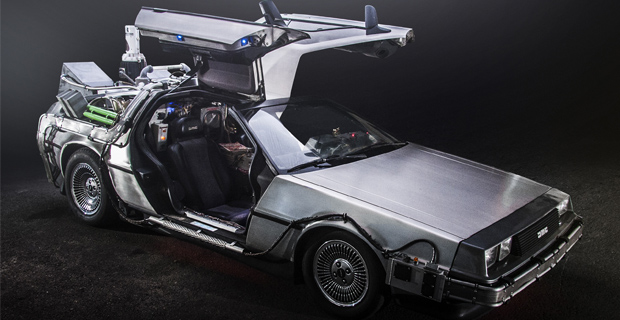 In “Back to the Future Part II,” Marty McFly time travels to Oct. 21, 2015, which is today, so let’s examine five ‘big brother’ predictions the movie made which turned out to be true.

Flying drones appear numerous times in Back to the Future’s 2015, and in one instance a drone even takes aerial photos for a news organization.

This prediction came true: news outlets such as Infowars are using drones to take both photos and videos.

When Marty and Doc arrive in 2015, Doc informs Marty that the government can control the weather such as thunderstorms.

The U.S. government has been experimenting with weather modification for decades, and recently the lead researcher for Geoengineeringwatch.org, Dane Wigington, revealed how government weather experiments may be linked to the wildfires and droughts in California.

In the film Marty’s girlfriend uses her thumbprint to open the door to a house.

Today’s 2015 is no different: financial institutions, tech companies and trans-humanists have been advocating the widespread use of biometrics for quite some time.

In fact public schools have been installing palm scanners in lunchrooms for students to use to pay for their meals, which has sparked major outrage from both parents and privacy advocates.

But unlike passwords, your fingerprints, palm prints and other biometric data cannot be replaced if they’re compromised by hackers.

“I think it’s a bad exchange for convenience,” Rebecca Jeschke of the Electronic Frontier Foundation said. “Your finger print is a very sensitive piece of your identity.”

In the movie, an elderly lady asks Marty to electronically donate $100 to save Hill Valley’s historic clock tower.

In real life, international banks have in fact been pushing for wireless, cashless payments via smartphones and other devices to not only eradicate privacy, but to also allow financial institutions and the government unparalleled ability to confiscate money at will through taxes and “bail-ins.”

Marty McFly wears ‘smart’ clothing in 2015 which uses sensors to adjust to his size. In today’s 2015, smart technology is invading every aspect of our lives and not necessarily in good ways.

“Smart street lights that ‘track everything we do all the time’ are on the horizon according to a CBS News report which touted the environmental benefits of new LED systems that also feature an array of surveillance capabilities,” Paul Joseph Watson reported in 2014.

And today’s smart technology is also invading the privacy of your own home, from controversial smart meters to smart TVs which record everything you say.