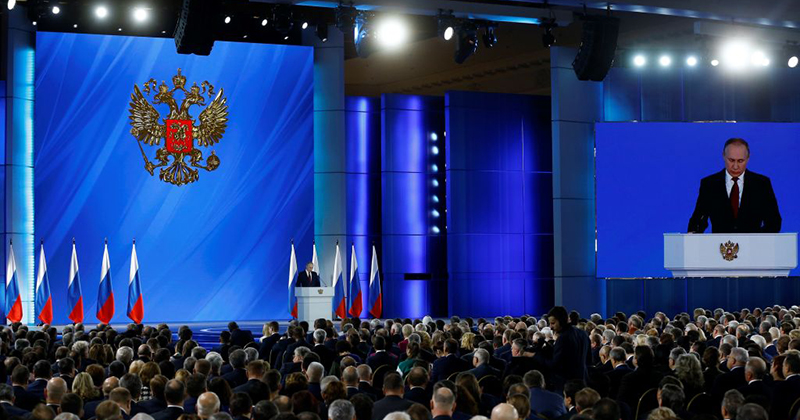 Putin made the comments during his annual state-of-the-nation address on Wednesday.

The president said the five permanent members of the UN Security Council – the US, China, Russia, Britain and France – carry a “special responsibility for securing the sustainable development of humanity.”


These five nations must begin to devise measures aimed at neutralizing any conditions for a global war, and develop new approaches towards securing the stability of the planet.


He previously expressed “deep concern” over the recent flare-up of tensions between the US and Iran, which almost put the two countries on a brink of war. Both states did not mince words after Washington ordered the drone strike which killed senior Iranian military commander Qassem Soleimani in Iraq. Moscow urged everyone to show restraint and seek diplomatic means to defuse the conflict.

Talking national security and latest add-ons to Russia’s military arsenal, Putin stated that Moscow is “not threatening anyone and does not seek to impose its will” on other countries.

At the same time, for the first time in history, Russia is “not catching up” to anyone in terms of its defense capabilities.

Instead, “it is the other countries” that are racing to develop advanced weapons that Russia already posseses.

In 2018, Putin unveiled a number of new state-of-the-art weapons – including the Kinzhal hypersonic nuclear-capable air-launched missile, which can be fitted on fighter jets.

In 2018, Putin unveiled a number of new state-of-the-art weapons – including the Kinzhal hypersonic nuclear-capable air-launched missile, which can be fitted on fighter jets.

Just days before 2019 drew to a close, the country’s Defense Ministry announced that its advanced nuclear hypersonic glider had entered combat service, with the first regiment of Avangard-armed missiles now operational.

Another new weapon from the 2018 announcement, the RS-28 Sarmat thermonuclear ICBM, is expected to enter service in 2021.