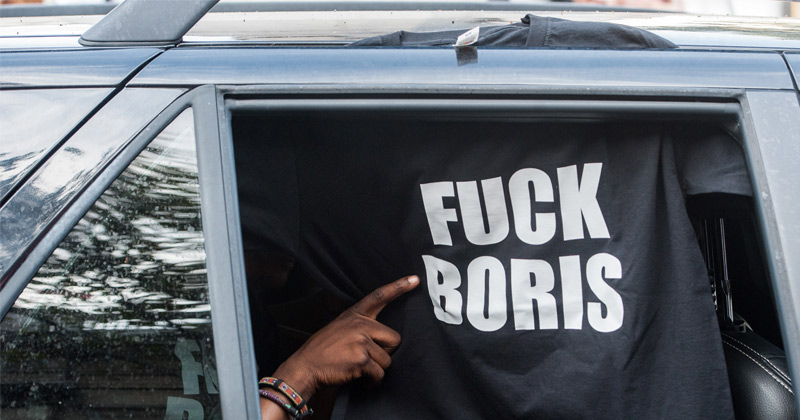 As we warned earlier, despite the Conservatives winning their largest majority since the 1980s, bitter leftists furious at the defeat of their spiritual and political leader, Jeremy Corbyn, are rallying in London, and across the country, to protest the outcome of a democratic election.

Those who still need an excuse to try and pretend like they haven’t wholly abandoned their support for Democracy (the West’s primary form of government for the past few centuries) have latched on, once again, to the Russia narrative. The notion that Russian intelligence threw its support behind Boris Johnson and Brexit, and deliberately tried to sway both the referendum and the 2019 vote has no basis in fact, yet certain American political figures are publishing op-eds trying to discredit the British electoral process.

On Friday evening, video appeared on social media of the “Not My Prime Minister” march in London, which brought protesters almost to the front steps of No. 10 Downing Street one day after their fellow Britons rejected Labour’s hard-left policies by handing it its biggest defeat since 1935. As always, legions of police were brought in to keep the peace.

Outside Downing St. The healing ⁦@BorisJohnson⁩ wants has not begun pic.twitter.com/kBo3yn3a05

As they always seem to do, a mob of Antifa thugs clad in black masks and black outfits have descended on the London rally and provoked skirmishes with the police.

Video footage shows the group of radicals clashing with police while waving a huge Antifa flag near Downing Street.

BREAKING NEWS- Disgusting scenes in Central London as masked ANTIFA fight with Police as they protest the victory of Boris Johnson.

Clashes with police also broke out on Parliament Street.

Apparently, rejecting the result of an uncontested and undoubtedly fair election is a tenant of the “Democratic Socialism” they claim is so much different from regular ol’ socialism.

Many were disappointed by the site of the mobs turning parts of Central London into chaos.

“Fuck Boris” signs, a message that will no doubt feature in plenty of left-wing rallies to come, appeared in rallies in Scotland and England, according to social media chatter.

A large rally was also reported in Glasgow, where the SNP won the largest share of seats.

And since the fun never stops, more ‘Stand Up To Racism’ rallies are expected this weekend in Leeds, one of the few areas of Labour’s “Red Wall” where support held up, and elsewhere.

Ironically, one of their favorite chants was “this is what democracy looks like.”

Is it, now? Because we thought that’s what you all were doing yesterday.

If you’re looking to follow along with the chaos, the Guardian has a live feed here.