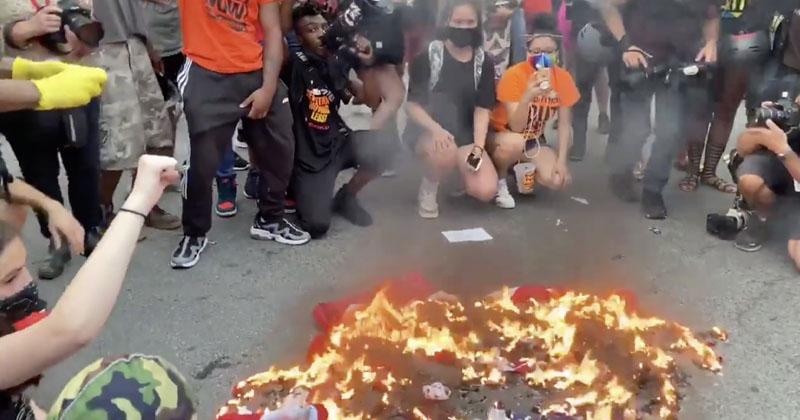 A group of Black Lives Matter protesters in Washington DC marked July 4 by trampling on the American flag before setting it on fire, arguing that the US state symbol represents “slavery, genocide and war.”

One of the videos, filmed at a square outside the White House that was officially named ‘Black Lives Matter Plaza’ in the wake of the protests, shows a young black woman dancing on the American flag, as another female protester with a megaphone in her hand can be heard shouting: “F**k the Fourth of July. F**k the American flag. That’s what we are saying.”

Another video shows the chanting woman being confronted by a man, wearing a T-shirt emblazoned with the name of Jesus.

“What does the American flag represent?” the woman asks, prompting him to respond: “America. Every citizen that lives in America.” The protester with a megaphone then argues that the banner is a symbol of slavery, saying “it was built on the back of slaves.”

Other videos show protesters stomping on the flag and preparing to set it alight.

Protesters outside the White House are getting ready to burn the American flag: pic.twitter.com/oB7fBbbI9P

Protesters rejoice when the banner finally catches fire, and then begin chanting as guided by one of the group’s leaders: “We knew what this flag represents: One, two, three, four, slavery, genocide and war, five, six, seven, eight, America was never great.”

Protesters outside the White House have now set a big American flag on fire while chanting: America was never great! pic.twitter.com/448IPYUR0y

The torching stunt had been touted as a “flag burning challenge” and was reportedly organized by the Revolutionary Communist Party, or RevCom.

Refuse Fascism is out here in front of the White House. They plan to participate in the “#FlagBurningChallenge” at 7:30. I plan to livestream when that happens.

Last year, the Proud Boys showed up and got into a fight with them. pic.twitter.com/7Uw52vuXyh

While the flag went up in flames to cheers from the public, some protesters were apparently not on board with the idea. As the same group attempted to burn a number of hand-sized American flags, they were confronted by fellow activists, arguing that such an action would play right into the hands of the Trump administration.

Things got tense at Black Lives Matter plaza when RevCom, short for Revolutionary Communist Party, attempted to burn a few small American flags only for other protesters to run in and confront them.

“This is what they want, don’t give it to them,” someone says. pic.twitter.com/FIby1j7mc7