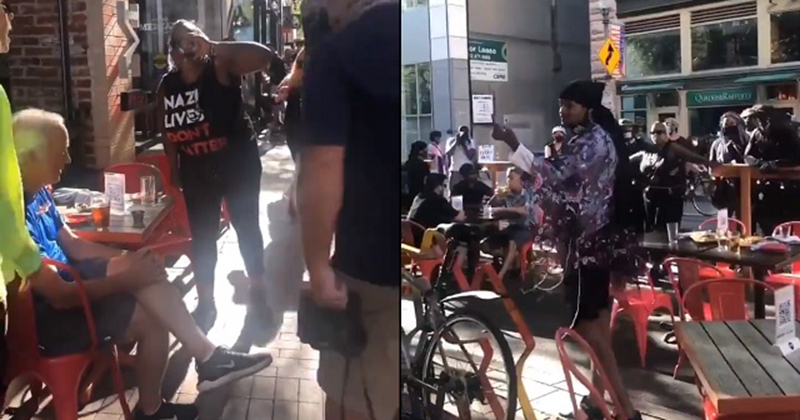 Black Lives Matter rioters on Sunday were filmed screaming “f**k white people” and “f**k the police” at an elderly white couple dining outside at a restaurant in Pittsburgh and then assaulting a white man in the street.

Video shows an African-American agitator screaming “f**k 12” and “f**k white people” at a white couple before giving them the finger.

An African-American woman of size in a “Nazi Lives Don’t Matter” shirt then approaches their table, steals one of their drinks (which looks to be a beer) and downs it as the couple reacts in shock.

“F**k 12” the first agitator shouts as he slams at table, breaking a glass in the process.

Another video from the same riot shows the mob attacking a white guy walkign with a bicycle, first slamming a megaphone in his face then bashing him with a skateboard after he swatted the man’s megaphone away.

A nurse overseeing the charts of submitted drug tests related to recent Antifa arrests show a mass number of those arrests all have at least one or a combination of intensely dangerous drugs like PCP, Angeldust, Methamphetamine, Crack, Cocaine, and more. Who supplies these protestors with such a large drug cocktail?

Police were nowhere to be seen.

All the assailants could be easily identified if the District Attorney wanted to pursue charges but it’s a Democratic s-hole so odds are they’ll look to charge the white bicyclist for defending himself.

9/5/20 Pittsburgh, PA | Protesters stop at a restaurant whose owner previously criticized protesters: “You won’t get no peace.”